England opener Jason Roy will try to follow the batting example of Australia‘s David Warner when he makes his Test debut against Ireland at Lord’s later this week. Warner defied conventional wisdom by showing how an opening batsman who had first made his name in white-ball cricket could then make a success of his Test career. READ: Liam Plunkett’s sudden drop

The 29-year-old Roy is no red-ball novice, having played for county champions Surrey, but mainly as a middle order batsman, and he has nine first-class hundreds to his credit. He comes into the Test set-up ahead of an Ashes series fresh from scoring 443 runs as an opener in England’s triumphant World Cup campaign. READ: Roy set to make Test debut against Ireland

Roy will also have the boost of walking out to bat for his debut Test innings alongside his old school friend turned Surrey captain, Rory Burns. The pair both attended Whitgift in Surrey, south-east England and Burns told reporters at Lord’s on Monday: “You’d be hard-pushed to find a more naturally talented batsman than Jason.

“Even growing up as a kid you saw Jason hit the ball, strike the ball and do things other kids couldn’t do. Over the last couple of years you’ve seen him rein it in, understand his game a bit more and sort of piece it all together.”

Burns added: “We have seen what a wonderful player he is. Hopefully he can keep on doing that and he can translate his white-ball form into red ball. I’ve known Jason since he was 10, so to stride out in a Test match with him will be a pretty cool feeling.”

England got through 12 opening partners for Alastair Cook after Andrew Strauss retired in 2012, with Cook himself bowing out of the Test arena last year with a hundred against India at the Oval – Surrey’s headquarters.

But Australia one-day captain Aaron Finch, having seen Roy hit a match-clinching 85 that helped beat his defending champions in a World Cup semi-final this month, was well aware of the essentially straight hitter’s quality.

“He definitely goes hard having played with him for a few years now for Surrey,” Finch said. “He’s a player that when he’s on he can be so damaging to an opposition. But he’s got some really good hundreds in county cricket, probably more so in the middle-order. If he gets going on his day, he can be brutal and he can score so quick in all forms of the game, he is a very dangerous threat no doubt.” 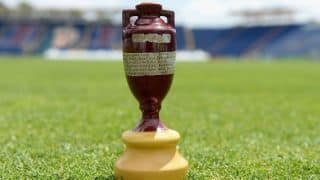