Ireland consolidated their position by making 207 for a first-innings lead of 122.

Ireland ended England‘s World Cup honeymoon in dramatic style on Wednesday, bowling out the host nation for a derisory 85 on the first day at Lord’s as they eyed one of the biggest shocks in Test history.

Tim Murtagh, who is 37 years old, took a stunning 5/13 in nine overs on a ground where he plays for Middlesex.

Ireland then consolidated their position by making 207 in reply for a first-innings lead of 122.

When they were all out, there was still time for one more over and England felt compelled to have nightwatchman Jack Leach, rather than a specialist batsman, face Murtagh. Leach somehow survived a maiden and England closed on nought for nought in their second innings.

Appropriately, it was tailender Murtagh who took Ireland into a hundred-run lead in their first Test against England after the visitors suffered a slump of their own when he pulled veteran paceman Stuart Broad for four.

In making 16, Murtagh scored more runs than he conceded while the fact 20 wickets fell broke a first-day record of 18 for a Lord’s Test that had stood since 1896.

Ten days after England won the World Cup at the ‘home of cricket’ against New Zealand and a week ahead of the Ashes, Ireland exposed their batting fragility in brutal fashion.

Just three England batsmen made it into double figures – Joe Denly, who top-scored with 23, debutant Olly Stone and Sam Curran – in an innings that was over inside 24 overs on a baking day in London. It was the fourth time in 34 Tests that England had lost all 10 wickets in a session – a worrying sign ahead of the five-Test series against Australia.

Murtagh’s ability was no secret but his superb return was the stuff of schoolboy fiction. The seamer, who recently took his 800th first-class wicket, gave a classic demonstration of his skill after England captain Joe Root won the toss and batted on an emerald green pitch prepared by Irish groundsman Karl McDermott.

“I’m not quite sure what’s happened in the last two hours,” an elated Murtagh, a Middlesex player for more than a decade, told Sky Sports during the lunch interval. “It’s a fantastic first session for us. I should know how to bowl on this ground — I’ve been here long enough.”

The home side were soon in deep trouble despite Root’s insistence they did not want to “sleepwalk” into this four-day match ahead of the Ashes. Test debutant Jason Roy, fresh from his World Cup heroics, fell for five when Murtagh, short of express pace but remorselessly accurate, squared him up with first slip Paul Stirling holding the ensuing edge.

Debutant Mark Adair (3/32) had his first Test wicket when Denly was leg before wicket and he also captured the prize scalp of Root, plumb lbw for two.

When Jonny Bairstow was bowled for a duck – one of three noughts in the England innings – off an inside edge by Murtagh as he attempted a booming drive, England were 42/5. And when Murtagh had Moeen Ali caught behind for a duck, the seamer had a place on the honours board for all those who take five wickets in a Test innings at Lord’s.

Stone drove three fours in four balls from Stuart Thompson before he was bowled by Adair to end a stunning morning’s play.

Ireland made a steady start before captain William Porterfield, hit on the head by a Stone bouncer, pulled Curran to midwicket on 14. But Andrew Balbirnie had a reprieve when, on 10, he edged Broad between Bairstow and first slip Root for a chance that belonged to the wicketkeeper.

Stirling had made 17 when Root, compounding a miserable day for the captain, dropped a slip catch off the unlucky Broad, leading the attack in the absence of the injured James Anderson. Balbirnie rubbed salt into England’s wounds with a 56-ball fifty that included nine fours.

At tea, Ireland were 132/2 but they lost four wickets for nine runs, with Balbirnie bowled for 55 by Stone who, in common with Broad and Curran, took three wickets.

“Tim bowled well, he showed the length to bowl on this pitch,” said Stone, who took 3/29. 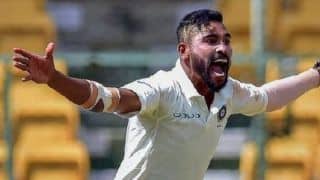