Ireland have made terrific progress against England at Lord’s on the first morning of the four-day Test match, courtesy Tim Murtagh who unravelled the home team’s innings in a crippling spell of 5/13.

Murtagh, who will turn 38 next month, used all his experience of playing at Lord’s for Middlesex to produce sharp seam movement on a green-tinged surface to send England hurtling from 36/1 to 43/7 in their first match since winning the World Cup on July 14 at the same ground.

The veteran seam bowler, who has played 179 first-class matches for Middlesex and taken 291 wickets at Lord’s, opened the bowling for Ireland in their third Test match and wasted little time in unsettling England.

His first wicket was the debutant Jason Roy, as the World Cup-winner was forced to edge low to Paul Stirling at first slip. After Ireland’s sole debutant Mark Adair picked up his first Test wicket in the form of Joe Denly, Murtagh took over as England lost six wickets for seven runs. Rory Burns edged to the wicketkeeper Gary Wilson, Jonny Bairstow and Chris Woakes were trapped lbw in the same over and Murtagh’s fifth wicket was Moeen Ali who also edged to Wilson.

Bairstow, Woakes and Ali all failed to score.

After this four-day Test, England will contest the Ashes from August 1 as the World Test Championship begins. Haris Sohail should be the new captain of Pakistan, Babar Azam can lead in Tests: Shoaib Akhtar 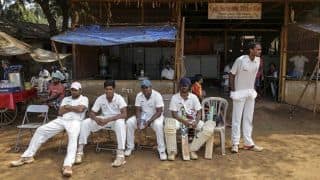