Nighwatchman Jack Leach scored a career-best 92 while Jason Roy notched up his maiden Test half century as England recovered from a poor start to erase a 122-run deficit and take a 181-run lead with one wicket in hand at stumps on a rain-affected day 2 of the only Test against Ireland at Lord’s on Thursday.

Leach, sent in as a nightwatchman the previous evening to negotiate one over of England’s second innings, played brilliantly for his 92 off 162 balls with 16 fours.

Test debutant Roy raced to 72 from 78 balls (10×4, 1×6) as the hosts gained the upper hand but just before tea, Ireland pacers dented England’s charge with quick wickets to leave them at 209/5 at tea.

Leach and Roy shared a 145-run stand for the second wicket as they went into lunch on 122/1. But after resumption, Roy lost his wicket to Stuart Thompson (2/44) while Leach missed out on a maiden and memorable hundred as he nicked first innings’s hero Tim Murtagh 1/52) to Mark Adair at the slip cordon.

Joe Denly could manage only 10 runs and Jonny Bairstow once again got out for a duck like the first innings. At tea, Root (12) and all-rounder Moeen Ali (7) were at the crease.

On the first day, Ireland, led by veteran pacer Murtagh’s maiden five wicket haul in international cricket, stunned the cricketing world with their performance as they ended day 1 with a 122-run lead over England who lifted the 50-over World Cup here earlier this month.

ALSO READ: Let s be honest, it s an embarrassment: Vaughan slams England after 85 all out against Ireland

London-born pacer Murtagh, 37, returned spectacular figures of 5/13 in nine overs as Adair (3/32) and Rankin (2/5), who became the first player in over seven decades to play Test cricket for and against England, supported him well. England were bundled out for 85 in 23.4 overs after opting to bat. 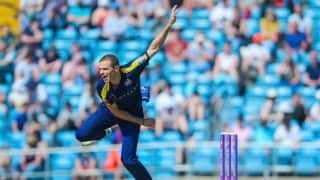 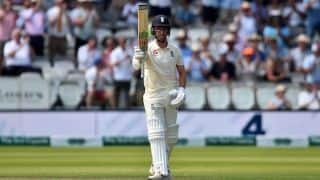