Leach missed out on becoming the sixth player to score a Test hundred as a nightwatchman.

England‘s Jack Leach may be playing his first Test at home but soaring temperatures in Britain meant his father missed out on seeing the nightwatchman make a career-best 92 against Ireland at Lord’s on Thursday.

Few would have expected much in the way of batting heroics from left-arm spinner Leach when he resumed on nought not out after being sent in as an emergency opener for one over late on Wednesday’s first day.

But Leach, belying a first-class record that contained just two prior half-centuries in 108 attempts and an average just under 11, proceeded to bat for over three-and-a-half hours before England reached stumps on 303/9 in their second innings, a lead of 181 runs.

Leach, explaining how his father Simon had missed being among a sweltering crowd at ‘the home of cricket,’ told reporters: “He was going to come but he saw the weather forecast and said it was too hot. I don’t think it would have been a good place for him to be today, he could have died! I think it was best he stayed at home in the cool.

“I gave him my house key and he went over so he’s literally been at mine watching the whole time. I’ll catch up with him later on.”

Leach and Test debutant Jason Roy, who made 72, shared a second-wicket partnership of 145.

But neither was able to reach the coveted three-figure mark, with Leach eventually edging veteran seamer Tim Murtagh – who took 5-13 in England’s woeful first-innings 85 all out – to second slip.

Ireland’s pacemen then took seven wickets for 77 runs to leave the four-day match in the balance.

“I know now that the nervous 90s are definitely a thing,” said Leach. “You think ‘I’m only two shots away’ and I was having some weird thoughts. I was trying to tell myself not to think about it which kind of made me think about it.

“I can’t believe it really. I just went out to try and do a job for the team I guess and try and soak up some balls. It probably went a little bit further than I thought it would.” 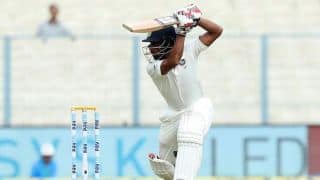