England were 18 for one after three overs.

England made a cautious start in the dead rubber ICC World T20 2014 match against Netherlands and Alex Hales looking positive at the crease and determined to take England across the finish line. England were 18 after three overs with Mudassar Bukhari removing Michael Lumb

One of the men who will go out out of the tournament with a reputation that is on the rise, Hales took first strike against the the off-spin of Michael Swart and a defensive prod ended up beating the fielders for a boundary. Lumb also freed his arms for a couple and England were underway, desperate to end this tournament on a high.

Timm van der Gugten’s pace has been a problem for even top batsmen in this tournament and couple with his nagging line, it was hard to free their arms and get things under way.  Mudassar Bukhari’s third over resulted in a cracking cut short by Hales but Lumb’s miserable tournament continued after a cut short through the packed off-side field found the safe hands of  Tom Cooper at short cover. 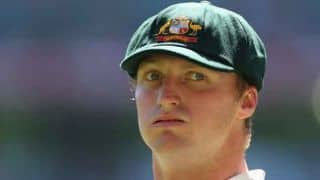