Asad Shafiq scored 109 in the fourth Test against England at The Oval.

London: Asad Shafiq dedicated his impressive century against England at The Oval on Friday to late Pakistan batting great Hanif Mohammad. “I would definitely like to dedicate the hundred to great Hanif Mohammad. He was a great batsman in our history and it is an honour to dedicate this hundred to him,” Shafiq told reporters after making 109. Mohammad died aged 81 in a Karachi hospital on Thursday following a prolonged illness. Short in stature, Mohammad hit 337 in a marathon and still unsurpassed 970-minute stay at the crease against the West Indies in Barbados in 1958. That record earned Mohammad the nickname of the “Little Master”. Flags above The Oval pavilion flew at half-mast on Friday as a tribute to Mohammad, who once said the equally diminutive Shafiq had the technique that came closest to his own batting style. Full Cricket Scorecard, England vs Pakistan , 4th Test match

Shafiq, despite making two noughts in Pakistan’s 141-run defeat by England at Edgbaston last week, was promoted up the order for the fourth Test at The Oval. He responded to his elevation with a composed innings of 109 and together with the experienced Younis Khan (101 not out) put on exactly 150 for the fourth wicket. PAK vs ENG 4th Test, Day 2 Full Updates

By stumps, Pakistan were 340 for six in reply to England’s first innings 328, a lead of 12 runs, as the tourists tried to end the four-match series all square at 2-2. Asked about Mohammad likening Shafiq’s technique to his own style, the 30-year-old said: “It is a great honour for me to know this and will be a great source of encouragement to do better and better.

“He was a great batsman, and I am not at all close to him, but if he had said that then I am honoured,” added Shafiq. This was Shafiq’s ninth century in 45 Tests but just his second outside Asia following his 111 against South Africa in Cape Town three years ago. READ: Anderson acknowledges Zaheer’s role in his career

Shafiq was one of three Pakistan batsmen who benefited from dropped catches before lunch and England assistant coach Paul Farbrace said: “Missed chances have been an issue for us. “If we’re serious about being number one in the world, we have to catch our catches.”

But England fought back late in the day with three wickets to dismiss Shafiq, Pakistan captain Misbah-ul-Haq and Test debutant Iftikhar Ahmed. “Until the last half-hour, it was a tough day,” said Farbrace.

“Those last two wickets have given us a bit of encouragement. Days two and three are generally the best times to bat and Pakistan, by bowling us out, have earned the right. They’ve batted well but we’ve battled back well.” 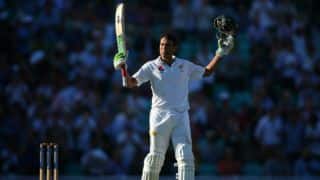