Check out Live Updates of Day 4 of the 1st Test between England and Sri Lanka here.

So England are firmly in command thanks to Gary Ballance’s superb knock. Sri Lanka will need a miracle to win, and a supremely good effort to draw this game. It was a pleasure taking you through the day’s play. Have a good evening/ night! We’ll be back tomorrow for what promises to be an engaging day’s cricket.

Hello and warm welcome to the fourth day’s play of England versus Sri Lanka match. This is Bharath Ramaraj and I will do the live updates for the day’s play. The first Test match played between England and Sri Lanka at Lord’s is heading for a draw. England will look to bowl out Sri Lanka on the fourth day. But even if they bowl them out, they need to bat well in the second innings and then again take 10 wickets in the second innings. It won’t be easy as the deck is flat. For Sri Lanka, Kumar Sangakkara was in great form and he went onto amass a century. Even Angelo Mathews, the skipper made a hundred.

For England, James Anderson bowled well, but didn’t get much support from others. Liam Plunkett struggled for control. Chris Jordan bowled well in patches. Earlier, Joe Root made a double ton and that helped England to get 575 for the loss of nine wickets on the board. It was his first double hundred in his Test career. For Sri Lanka Shaminda Eranga and Nuwan Pradeep bowled well in patches. 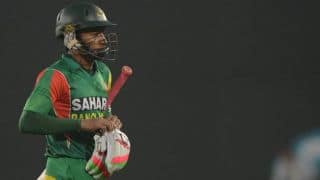