England will look to usher in a new era when they take on Sri Lanka in familiar conditions at home.

After suffering a whitewash in Australia, England will look to usher in a new era when they take on Sri Lanka in familiar conditions at home of cricket, Lord’s, in the first Test starting on June 12. On the other hand, Sri Lanka have had a successful run in the past having won the One-Day International (ODI) series in England and also the Test series in Bangladesh.

England have selected a new opener, Sam Robson, to partner their captain Alastair Cook. Robson comes across as someone with sound defense, especially against pace. Ian Bell should bat at three what with Jonathan Trott missing from the setup due to stress-related issues. Moeen Ali, the left-hander will look to fill the big shoes left vacant by Kevin Pietersen. He has a wide array of strokes and bowls off-spin. Gary Ballance and Joe Root are likely to fill the remaining slots in the batting line-up.

Their bowling will largely depend on James Anderson. The swing/seam bowler looked off colour, especially during his third and fourth spells in Ashes 2013-14. England need him to be at his best against Sri Lanka. Stuart Broad, his pace bowling colleague has struggled for fitness and form in recent times. England have brought back Liam Plunkett into the setup. He has gained an extra yard of pace and is bowling with better control these days. He can also bat a bit. Chris Jordan is the other option they have in the squad. England though, will sorely miss the services of Graeme Swann, the veteran spinner, as he has retired from the game.

Sri Lanka are likely to open the batting with Dimuth Karunaratne and Kaushal Silva. Kumar Sangakkara and Mahela Jayawardene are the two veterans in the line-up. They are playing on their last legs and will look to make their mark on what should be their last tour to the Old Blighty. Lahiru Thirimanne has a fine technique and can bring solidarity to the line-up. However, he will have to fight for a place with the dashing middle-order batsman, Dinesh Chandimal. Angelo Mathews, the captain will bat at No 6 slot.

Sri Lanka’s bowling will mainly depend on Rangana Herath, the slow left arm orthodox. Nuwan Pradeep can bowl at good pace but lacks control. Shaminda Eranga has shown a bit of promise.

England, despite their recent loss look the better side at home, especially their pace bowling stocks are better than the opposition ranks. The track at Lord’s should play true unless weather conditions play a part. 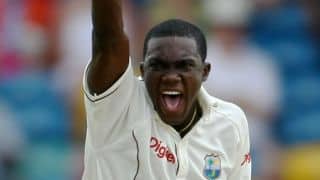