The tourists, already 1-0 up in this three-match series, were 227-4 at tea on the fourth day, needing just 43 more runs to make England bat again in Manchester.

Shamarh Brooks led the West Indies to within sight of avoiding the follow-on in the second Test against England at Old Trafford on Sunday. The tourists, already 1-0 up in this three-match series, were 227/4 at tea on the fourth day, needing just 43 more runs to make England bat again in Manchester.

Brooks was 60 not out, having kept England at bay in an attractive fourth-wicket partnership of 76 with opener Kraigg Brathwaite.

But Brathwaite’s hopes of following his 134 in a five-wicket win against England at Headingley three years ago with another hundred ended on 75 when, trying to turn Ben Stokes legside, he was caught and bowled off a leading edge.

It was a desperately needed wicket for England with all-rounder Stokes, whose superb 176 was the cornerstone of their first innings 469-9 declared, not brought on to bowl by captain Joe Root until the 51st over of West Indies’ reply.

England’s best chance of winning this match, following a four-wicket loss in the first Test at Southampton last week, lay in enforcing the follow-on after rain had washed out Saturday’s third day at Old Trafford.

By contrast, play resumed Sunday in bright sunshine with Wisden Trophy holders West Indies, looking for their first series win in England since 1988, 32-1.

Nightwatchman Alzarri Joseph, who might have been lbw to Sam Curran had England reviewed on Friday, should have been out for 16 on Sunday when he edged Chris Woakes.

But third slip Stokes dropped the catch after Zak Crawley, moving across from second slip, obscured his view.

Off-spinner Dom Bess, however, succeeded where England’s quicks had failed when, with just his second ball Sunday, he had Joseph well caught by Ollie Pope at short leg for 32.

Shai Hope, whose lone two Test hundreds came at Headingley in 2017, helped Brathwaite add 53 before, on 25, he was caught behind jabbing at a Curran cutter.

West Indies’ 123-3 might have become 123-4 but Brathwaite, on 46, was spared by umpire’s call when England reviewed a Stuart Broad lbw appeal.

Brathwaite then completed a 121-ball fifty when he drove Broad, controversially rested at Southampton, down the ground for four.

Brooks elegantly eased Broad off his pads and drove Bess for two of nine boundaries in a fifty that came from just 96 balls.

Root set increasingly funky fields for Stokes and the paceman’s perseverance was rewarded when his 10th successive over of pounding the ball in short saw him dismiss Brathwaite.

England came into this match, the second in a series that marks world cricket’s return from the coronavirus lockdown with a revamped pace attack.

Having already rested James Anderson and Mark Wood, they had to omit Jofra Archer after the fast bowler admitted making an unauthorised trip home after the first Test that breached this series’ bio-secure health regulations.

However, the England and Wales Cricket Board announced Saturday that, following a disciplinary hearing, Archer would be available for the third Test at Old Trafford starting on July 24. 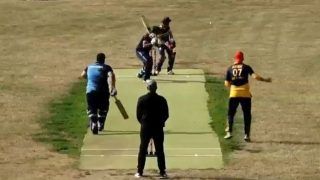