India Under-19 claimed the title beating Sri Lanka Under-19 in the final and Tyagi was the Man-of-the-Match returning figures of 6/38 with his left-arm spin in India 114-run win.

Delhi-born Harsh Tyagi played three List A matches for Railways in the ongoing Vijay Hazare Trophy 2018-19 and even though he managed just one wicket at an average of 144 and was part of the match where Mumbai racked up 400 runs against Railways, the 19-year-old looked at the positives, and took the learnings to the Under-19 Asia Cup held in Bangladesh.

India Under-19 claimed the title beating Sri Lanka Under-19 in the final and Tyagi was the Man-of-the-Match returning figures of 6/38 with his left-arm spin in India 114-run win.

Ya, this experience (Vijay Hazare) really helped me in Asia Cup. I really enjoyed bowling against the likes of Shreyas Iyer, Ajinkya Rahane, and Prithvi Shaw. This match was a huge confidence booster for me and came at just the perfect time before the Asia Cup, Tyagi told the Hindustan Times.

On the team s performance in the Asia, where India remained unbeaten, Tyagi said that their preparations leading up to the tournament was brilliant.

This is a great feeling for us, we have stayed together for three months now and to win this tournament is great. The team talk was always very positive. We have been together for three months now and we had the national camp before this series. We had the Sri Lanka tour, and a quadrangular tournament. Everything led up brilliantly to the Asia Cup and the experiences helped us a lot, Tyagi said.

India registered big wins over Nepal (171 runs), UAE (227 runs) before getting the better of Afghanistan (51 runs) and Bangladesh (2 runs) to make it to the final. In the final, India cemented their authority by scoring 304/3 before bundling out Sri Lanka for 160.

After making his mark in the age group cricket, Tyagi s next goal is to rise up the ranks and play for India in Tests.

I am really excited to play the Ranji Trophy. It has to be the biggest Test for me. If I perform well there, I will get selected to play for India A . For me the ultimate aim is to get selected for the Indian Test team, he added. 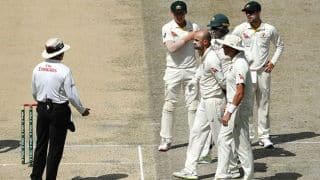