Fast bowling legend Glenn McGrath has heaped high praises on India’s Jasprit Bumrah calling him an excellent modern-day bowler who will prove to be a great asset for his team.

Bumrah’s stock continue to rise with another impressive display in overseas conditions as he played an important role in securing India a vital 1-0 lead in the ongoing four-Test series against Australia at the Adelaide Oval on Monday.

Bumrah claimed six wickets in the two innings in the first Test with three crucial strikes in the Australia’s second dig. He dismissed Shaun Marsh who was leading the home team’s fightback with a timely half-century and then got rid of their captain Tim Paine as well. Pat Cummins, who led a rearguard effort to keep Australia’s chase of 323 alive in the final day, then became his third victim.

“He is an excellent modern-day bowler,” McGrath, who played 124 Tests for Australia, was quoted as saying by mid-day on Tuesday. “He intelligently varies his length and speed and does so at will. Of course, his yorkers are good and his bouncers are deceptive.”

Bumrah has caught attention with his skills and a unique action. The 25-year-old made his Test debut in January this year and in seven Tests so far, has taken 34 wickets at an average of 24.44 that include two five-wicket hauls.

McGrath feels that the way Bumrah manages his body, the chances of him picking up a major injury are less despite an unorthodox bowling action. “Bumrah is fantastic. He runs in smoothly and increases his momentum nicely. His follow through is fine too. The way he runs in and the manner in which he uses his back, the chances of getting injured are less. He has been consistently good and is a great asset for India,” he said. 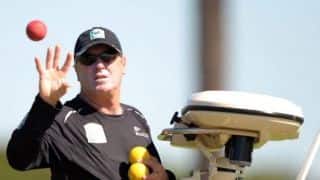 Keep your feet on the ground, don’t get carried away: John Wright to Virat Kohli’s India