Mithali Raj had no expectations to play international cricket again following the turn of events after she was dropped from India's ICC Women's World T20 semi-final clash against England.

Mithali Raj had no expectations to play international cricket again following the turn of events after she was dropped from India‘s ICC Women’s World T20 semi-final clash against England.

India were crushed in a one-sided encounter after they entered the last-four stage as the only unbeaten team. The decision to drop Mithali who had scored back-to-back fifties during the league stage polarised opinions.

Mithali’s manager called T20I captain Harmanpreet Kaur manipulative and liar. Mithali herself said to have been mistreated by the then coach Ramesh Powar who in turn questioned the veteran cricketer’s attitude.

Honestly, I thought I would be dropped from T20s and sacked from captaincy. I never had any expectations that I would play, Mithali told The Hindu.

Recently, Harmanpreet cleared the air about her rift with Mithali saying there was no problem as such between the two and that she has always respected the senior player.

I never abused captaincy, nor have I been vindictive towards any player, Mithai said. There are some players who have spoken against me. Yet, tomorrow if I am in a position to make a difference to them, I am more than willing to help them out.

She continued, I am also making a very conscious effort not to be a liability in terms of fitness. When I am running between the wickets my partner should be confident that I can run for her.

That the spat was played out in public made it a spectacle of sorts putting the often neglected women’s cricket centre of focus but for unwanted reasons. Mithali, who packs an experience of 10 Tests, 197 ODIs and 85 T20Is, called it as the most challenging phase.

Having put the past to bed, her focus is now firmly set on doing well during the New Zealand ODI series.

I have faced difficult times in the past. But this time it was in the public domain. Hurt a lot of people in many ways at different levels. It was the most challenging phase for me, she said. I was deeply disappointed at the negative portrayal of women s cricket more than about I being treated like that. It was not about my batting position, which was never a concern, but about being part of the winning team. It was more about the behaviour.

I don t know whether it was deliberately floated that I was more concerned about the batting order. Remember, I have batted in different slots in ODIs over the years Sanity was the most crucial factor during that phase. One had to be patient and it was very difficult during those times, the 36-year-old said. 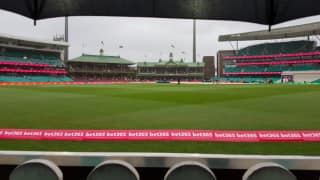