Faf du Plessis welcomed a change to the DRS that will come into effect for the first time in the first Test against Bangladesh starting Thursday.

South African captain Faf du Plessis on Wednesday welcomed a change to the decision review system that will come into effect for the first time in the first Test against Bangladesh starting at Senwes Park on Thursday. The change in the DRS system is one of several changes to playing regulations made by the International Cricket Council, including a restriction on bat sizes and a provision for players to be sent off the field for serious misconduct. ALSO READ: ICC’s revamped playing rules to come into effect from Sep 28

Teams will no longer lose a review for a leg before wicket decision if television replays show “umpire s call” a provision for umpires to have discretion on close decisions. Previously an unsuccessful review meant losing one of two opportunities for challenges in Test matches.

“The umpire s call is a very good change,” said Du Plessis. “The system is there to back up the umpire but if you ask for a review and have made the right call (on whether the ball is shown to be hitting or missing part of the stumps) at least you get it back.”

Another change to the regulations is that reviews will not be re-set after 80 overs as in the past.

South Africa will enter the series with a new coach in West Indian Ottis Gibson and Du Plessis said it was an opportunity to get back to winning ways after a losing tour of England earlier this year.

He said of Gibson: “He wants to observe and see how we go about things and as time goes on he can start making a few decisions on what changes he wants to make. He has given a few fresh ideas to the bowling unit.”

Although all-rounder Wayne Parnell was passed fit, Du Plessis said he was unlikely to play, with the final choice from the 13-man squad likely to be between batsman Theunis de Bruyn and uncapped all-rounder Andile Phehlukwayo.

Du Plessis said Bangladesh deserved respect. “In the last two years their cricket has really improved. It is an opportunity for them to show they can play outside their own country. But if we play to our full potential it will be tough for Bangladesh.”

It was announced that new ball bowler Vernon Philander, who had been due to play in a domestic match from Thursday, with a view to playing in next week’s second Test, was still two or three weeks away from making a return from a back injury.

Bangladesh captain Mushfiqur Rahim said the key for his side would be how the batsmen handled South Africa’s fast bowlers on bouncy pitches. “It is our next challenge to do well abroad. We have drawn a series in Sri Lanka, were competitive for three days in a Test in India and our batsmen did well in New Zealand,” he said. “We know that against the top sides we have to be consistent for five days,” said Rahim. “As a group we are confident and we have had some great days of training.” 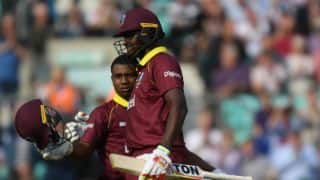