South Africa captain Faf du Plessis conceded that the bowling needs to get better, despite a 37-run victory over Afghanistan in T20 World Cup 2016.

Mumbai: South Africa captain Faf du Plessis conceded today that their bowling needs to get better, despite a 37-run victory over minnows Afghanistan that brought their World Twenty20 campaign back on track. “We have not bowled well in first three overs which has been disappointing. We need to get better. We are going to play on different wickets now. The batsmen have dominated the first six overs. It’s a big challenge for the bowlers,” said Du Plessis at his post-match presser. “Obviously there were some really good shots but we need to be a lot better, it is as simple as that. You have to improve. The batsmen can play great shots but our skill levels are just letting us a little bit down in the first three overs.” FULL SCORECARD: South Africa vs Afghanistan, T20 World Cup 2016, Match 20 at Mumbai

He also defended the surprise move to drop the team’s premier fast bowler Dale Steyn from the XI for today’s second game after he had leaked 35 runs in two overs against England in their Super 10 Group 1 opener two days ago. “The thinking behind it was that it skids in the first six overs and the ball does not swing much. It’s not the usual Mumbai wicket with pace and bounce. We wanted someone with variations, thought taking the pace off the ball will help. And he (David Wiese) also strengthens our batting. It was the right decision,” said Du Plessis. READ: Afghanistan fall short by 37 runs during chase of 210 vs South Africa in Group 1 match, T20 World Cup 2016 at Mumbai

“I love someone’s confidence (Afghanisan’s opener M Shahzad),” he retorted when told that the player had actually told the media prior to his presser that the Afghans were unhappy that Steyn was not playing as he could have been hit through the line. “He bowled really well in the three games against Australia (back home) and in the warm-up games also he bowled well. We make selections based on wickets we play on,” he said. “The thinking might change again when we move to different places. The Nagpur wicket has been turning quite a bit. We will make those decisions once we get there,” he added.

He also praised the bowling of Chris Morris who grabbed 4 wickets for 27 runs and hastened Afghanistan’s defeat. “Chris Morris showed that by bowling with good discipline and good intensity there s something for the bowlers. It’s important for our bowlers to get confidence. Imran Tahir was probably going to bowl the third or the fourth over but then we got Shahzad out. Obviously, I didn’t know JP was going to get injured, he was going to bowl as well today. I would have got 2-3 overs from (JP) Duminy but he got injured,” he said.

Duminy batted and made 29 not out in 20 balls but did not field. He said the South Africans needed tracks which were a bit two-paced. “In the first two games, we have played on batting wickets. Wickets are not going to be the same in other places. We want wickets to be two paced for our bowlers to exploit with their skills,” he said.

Du Plessis praised A B de Villiers, who smacked 64 in 29 balls with 5 sixes and four fours. “I am really happy for AB. I know he wants to make big players for the national side, he wants to improve he has done for us in the past. He is a proud cricketer and he wants to show that he is a world great batsman. I am hoping that today will make him really hungry to just out there in the tournament and score massive runs, not just to have a small impact of 20-30 runs but actually have a match-changing impact and today he did that beautifully in setting up himself, giving himself a bit of time. It shows that if he comes in a bit little late today where he can knock it around and set himself up for the death and we all know what he can do in the death,” said Du Plessis. 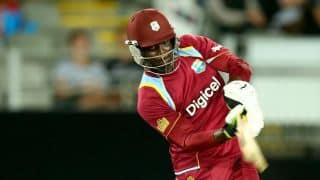