Ashraf was included in the 16-man Test squad announced on the back of some impressive performances in the shorter formats of the game.

Karachi: Pakistan all-rounder Faheem Ashraf has said that he is eager to cement his place permanently in all three formats of the game after receiving a maiden call-up in the national Test squad against England and Ireland. The 24-year-old was included in the 16-man Test squad announced by national chief selector Inzamam-ul-Haq on the back of some impressive performances in the shorter formats of the game.

Besides Ashraf, current chief selector Inzamam-ul-Haq nephew Imam-ul-Haq, opener Fakhar Zaman, batsmen Usman Salahuddin and Saad Ali are the other four uncapped members to have got maiden Test call-ups. Ecstatic by his inclusion in the Test squad, Ashraf said that it was a dream for him to play in the longest format of the game, which he describes as the `ultimate challenge` of the game.

“It’s the dream of every cricketer to play for your country at the Test level, which is the ultimate challenge. I am extremely happy to be selected in the Test squad,” the Express Tribune quoted the all-rounder, as saying. Having already represented Pakistan in eight ODIs runs and 10 T20Is, Ashraf’s ultimate goal is to secure a permanent spot in the national squad by maintaining his physical fitness and putting up consistent performances.

“The goal is to cement my place permanently in all three formats of the game through consistent performances. I believe, to survive in all three formats, you need physical fitness and consistent form and I know that is the secret to success, which is why I am training hard,” he said. Ashraf, who is the joint-top wicket taker in the recently-concluded Pakistan Super League (PSL), believes that it would not be a meteoric task for him to adjust to the five-day format as he has already played a lot of four-day cricket.

“I’ve played four-day cricket before, so I don’t think it will be hard to adjust to the longest format of the game,” Ashraf said. Ireland are slated to play their inaugural lone Test against Pakistan from May 11 before the latter side head into England for two-match series, beginning May 24. 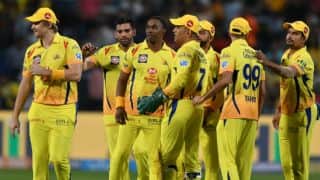 IPL 2018: Change of venue from Chepauk to Pune will benefit CSK financially