A fan has alleged a group of fans was directing 'racist and homophobic abuse' at players during the fourth Test of the ongoing Ashes,

A fan has alleged he was forced to leave Old Trafford, venue of the fourth Test of the ongoing Ashes, after witnessing ‘racist and homophobic abuse’ from a group of fans while the contest was going on.

Ed Marsh, who attended the match with his parents and sister, complained to Lancashire Cricket Club through social media on the second day of the Test saying a group of eight men was singing racial song directed at England’s Barbados-born fast bowler Jofra Archer.

The same group of fans also subjected women to sexist chants and aimed homophobic abuse towards some players as well.

Lancashire, in a statement, said they have “zero tolerance policy on anti-social behaviour” and that “two response teams were sent to the scene but did not witness any foul or abusive language”.

“The Archer chant happened three times before I spoke to a steward on the day but being asked to identify people who are two metres away makes you a target. It was scary. It could have got physical and nasty,” Marsh told BBC.

He added, “People talk about the atmosphere at cricket and most of it is good natured but this was sustained anti-social behaviour. If you are from a minority background, why would you go?”

The incident follows reports of two Australia fans being ejected from Old Trafford after suing foul and abusive language against Archer on the first day of the Test.

England and Wales Cricket Board (ECB), in a statement, said it’s “immensely disturbed that a spectator has felt intimidated and distressed”. 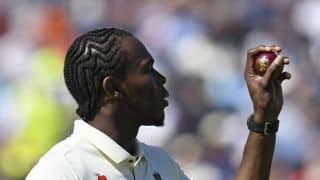