On his Test debut, at Trent Bridge, Pant hit the second ball he faced for six and took seven catches.

Picked as replacement for Dinesh Karthik, Rishabh Pant had an impressive debut in the third Test between India and England at Trent Bridge, Nottingham. He hit a six off the second ball he faced in Test cricket, off Adil Rashid, becoming the first Indian to do this on debut. He then went on to take five catches in the first innings and two in the second.

Pant has impressed former India and Lancashire wicketkeeper Farokh Engineer, who told Hindustan Times: I m very impressed, he has tremendous reflexes. I love to see youngsters make a mark. He didn t show any nerves and hit the second ball for a six. My first three balls I faced in Test cricket, I hit them for fours, but that was out of sheer nervousness.

Rishabh has guts and confidence. Some nerves are bound to happen being his debut. He wanted to get off the mark quickly and that is the shot he plays. But he was bubbling, Engineer added.

Of course, there was criticism as well: He gets up too soon. One must rise with the ball. He also positioned himself a bit too back, the slip cordon also. Jasprit Bumrah once called him forward. If I meet him, I will tell him. A wicketkeeper should stay as low as possible to move quickly and even turn half-chances into catches. But he will learn. Overall, his performance was brilliant.

Note: Engineer got two singles off the first three balls he faced in Test cricket, and did not hit a four before the seventh ball he faced. 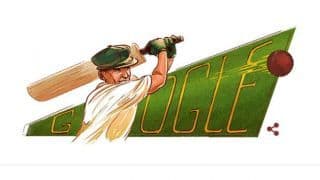