Australia fast bowler Shaun Tait has said he hopes his dust-up with Sri Lanka's Tillakaratne Dilshan is the stuff of things to come at the World Cup as he tries to get under the skin of batsmen. 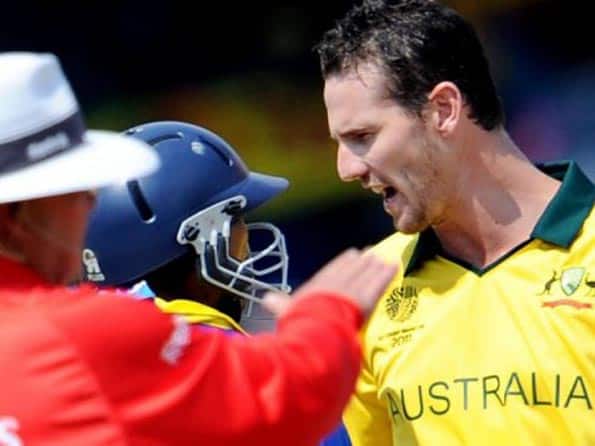 Australian fast bowler Shaun Tait (right) exchanges words with Sri Lankan batsman Tillakaratne Dilshan (second-left) in their Cricket World Cup at the R. Premadasa Stadium in Colombo on March 5. The Australian has said he hopes his dust-up with Dilshan is the stuff of things to come at the World Cup as he tries to get under the skin of batsmen.

Australia fast bowler Shaun Tait has said he hopes his dust-up with Sri Lanka’s Tillakaratne Dilshan is the stuff of things to come at the World Cup as he tries to get under the skin of batsmen. There was time during last Saturday’s Colombo washout for slingshot speedster Tait and the dashing Dilshan to exchange a few heated words.

In the second over of the match, Dilshan edged Tait through the slip cordon for a first-ball boundary — something rarely appreciated by any fast bowler.

“Things kicked off there for a bit,” said Tait, who had his revenge three balls later when he dismissed Dilshan. “He’s a dangerous player so I thought I’d attack his mind and try and get under his skin a bit and vice-versa, he got under mine. If you start off like that and there’s a few words exchanged it’s nice to get a wicket. It worked out well for me.”

The 28-year-old Tait dropped out of international cricket in 2008 because of repeated injuries and has decided to concentrate on shorter formats in a bid to ensure he still has a professional career.

“It’s been good, the last couple of years have been brilliant. Just playing the shorter form of the game has been a good decision and this World Cup has been great. Any time you play cricket for your country is great.

“I’ve changed massively. The decision was a good refresher to have a couple of months off. That was a while ago now, so things have been good ever since. This is probably going to be my last World Cup so I’m just going to enjoy it while I can,” Tait said.

Defending champions Australia, bidding for a fourth straight title, continue their group campaign against rank outsiders Kenya and Canada in Bangalore on March 13 and March 16 respectively.

They had to wait eight days to play Sri Lanka in their third match of the tournament and now face a seven-day break before facing Kenya at the Chinnaswamy Stadium.

“It’s not ideal, but we have known there was a chance of that happening right the way through, before the tournament even started,” said Australia captain Ricky Ponting after the no-result washout against Sri Lanka.

But Tait, often used in short spells by his skipper, was not complaining. “There’s been decent gaps between games which is good for the fast bowlers.”