Sourav Ganguly says playing professional cricket is a rare opportunity that he advises should never be avoided.

India captain Virat Kohli put the ball firmly in the court of players when questioned over their individual workload management during the rigorous Indian Premier League (IPL) 2019 which will give way to the World Cup in May. (READ: BCCI releases IPL schedule for remaining group stage matches)

Remaining injury free, avoiding burnout will be their main concerns, especially for the World Cup hopefuls. Kohli said the players will have to be smart about managing their schedule while representing their franchisees over the season. (READ: For Ganguly and Ponting, consistency key to Delhi Capitals revival)

Sourav Ganguly feels that while the decision to play or not should be left to an individual but playing professional cricket is a rare opportunity that he advises should never be avoided.

“Leave it to the players. If they want to play and if they keep performing, why should we stop it?” Ganguly said on Tuesday. “It’s their career, they want to participate in every format like we did when we were young. Players will find their way. Being injured is not being unfit. When you play at the top level consistently, there are times when you will get injured and there’s no guarantee. I believe that as a player when you get the opportunity to play, play. Never say ‘I don’t want to play.’ It doesn’t work.”

The BCCI on Tuesday released the group-stage schedule of IPL which ends on May 5. The final will be likely to be played on May 12 with the World Cup set to start from May 30 leaving players precious little time to recuperate for the big event. (READ: Rishabh Pant can win India the World Cup – Ponting)

Ganguly says there is a limited window to play international cricket which won’t open again and so players have to work out a strategy to keep themselves fresh.

“It’s a lot of cricket but just play. You don’t play forever. How many cricketers get to play 15-16 years of international cricket? So, I don’t think any of them should worry about being fatigued, being tired. Just find a way to get fresh. I have always said there’s a limited time of play the sport and when you are getting the opportunities at the international, IPL level, it won’t come back. So, find a way to get rest, stay fresh and keep playing,” he said.

He added, “Not playing isn’t the solution. Even our generation played a lot of cricket. Yes, IPL wasn’t there, came towards the end of our career. But cricket was same in the past. Before you realise, you will see 10-12 years have just flown away. Just make the most of it and play every possible match you can.” 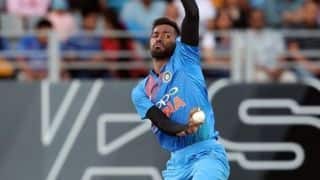