Both Ponting and Ganguly agree keeping faith in a group is going to be important and they will avoid knee-jerk reactions.

A consistent run to players and relying on a settled group is the the mantra for Delhi Capitals (DC) this Indian Premier League (IPL) season as the franchise targets to leave behind years of underwhelming performances. (READ: Rechristened Delhi hope for Capital gains)

The team has a history of chopping and changing. Last season, under a new captain and coach they underwent another round of overhaul at the auction for last season, but little changed when it came to the actual stage.

Gautam Gambhir was roped in as the skipper, a host of stars including the likes of Glenn Maxwell, Kagiso Rabada, Trent Boult, Prithvi Shaw, Colin Munro, Jason Roy among others were purchased. And the result? Wooden spoon, for the fourth time in their history.

Under new owners, a new name and a logo, DC, who have already received a cosmetic makeover and under the guidance of two legends, are hoping that the changes are skin deep and not only at the surface level.

So is this going to be the year of Delhi Capitals? “Well it has to start somewhere and this is the season,” sums up Sourav Ganguly, who will be serving the side under the capacity of an advisor throughout the season. “Our one-point agenda is that the team has to play well and we will do everything to get that going.”

Ganguly will add to DC’s already high-profile backroom staff featuring Ricky Ponting and the pair will put their cricketing brains together to change the fortunes of a team that has never made it to the final of IPL the only team do not have done so.

Picking up right players at the auction in December was the next step taken in the right direction as the brought in the dependable Shikhar Dhawan to bring in the much-needed solidity to their top order. That gave them the option to stack their side with multiple allrounders who they feel will be able to lend them the flexibility that a lengthy tournament like IPL demands.

“If you look at our top order batting as well, we were really conscious of trying to stuff up our batting line-up with Indian batsmen,” DC head coach Ricky Ponting said at a media interaction in Delhi on Tuesday. “We have Shikhar Dhawan, Prithvi, Shreyas and Rishabh at the top. Those four guys are going to be the basis of our batting right through the tournament. So that gave us an option to try and pick a few more allrounders. So Chris Morris, Sherfane Rutherford, Keemo Paul we have got allrounders in that category. Jalaj Saxena, Axar Patel, Harshal Patel So we have got a lot of allrounders which gives us all those bowling options.”

He added, “I think as an IPL tournament goes on, you need to have great flexibility, you need guys who can play different roles in different positions in your lineup. Yes, it was a conscious effort. A lot of different options that gives us the ability now to put even ahead of the first game, 6 or 7 different playing combinations on a team sheet and still have very good team.”

Ponting and Ganguly, two of the greatest captains to have played the game, have been rivals in the past before IPL brought them together as teammates and now as part of a coaching staff. So how do they plan to strike a winning combination?

Ponting says despite Ganguly’s role being of that advisor, he’ll be another voice who will be involved on a day-to-day basis.

“We sat and talked about how we best work together and basically Sourav is another brain, another set of eyes and ears to watch what we are doing and listen what we are trying to do and come up with his own ideas as to how we can be better. That’s the bottom line. We would be crazy to not have as many very smart cricket people around the team as possible.

“The overall objective for the Delhi Capitals is to win the IPL and we are going to give ourselves every opportunity to do that. We do a lot of talking, we speak to players a lot, we trying to find ways to improve players on a daily basis and if we can do that then hopefully the results will come for us.

“We did a good job at the auction table. We have got a good blend of youth and experience in our squad and if use guys work really work together and do the right things by the players then we can achieve some special thing this season.

Both Ponting and Ganguly agree keeping faith in a group is going to be important and they will avoid knee-jerk reactions. 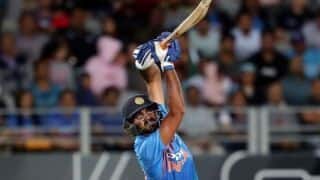