Jharkhand skipper MS Dhoni has been rescued from the fire, however the status of the rest of the team is still unknown.

In a sudden turn of events, the second semi-final match between Jharkhand and Bengal has been postponed due to fire in Jharkhand s team hotel. It is believed that the kits of the players too have been damaged and as a result the match will take place on Saturday. Jharkhand skipper MS Dhoni has been rescued from the fire, however the status of the rest of the team is still unknown. The winner of this match were supposed to meet Tamil Nadu in the final, scheduled to be played on Sunday at the Feroz Shah Kotla Stadium, Delhi. Jharkhand eased through to a win against Vidarbha in the quarter-final, while Bengal recorded their highest ever run-chase, when they successfully chased down 319 against Maharashtra in the quarters. Live Cricket updates, Vijay Hazare Trophy 2016-17, Semi-Final 2, Jharkhand vs Bengal at Palam

“A fire call was received at 6.30 a.m., from Welcome Hotel in Dwarka Sector 10 area, following which 30 fire tenders were rushed to the spot,” a fire official told IANS. “The flames were doused at 7.50 a.m.,” the official added. The hotel too issured a statement. It said, “Fire broke out in the shopping mall, adjacent to the hotel. In keeping with our safety and security guidelines, as a precautionary measure, we evacuated all our guests. There were no casualties recorded at the hotel.”

In the group stage, Jharkhand finished below Karnataka in the group stage with 16 points from six games in Group A. Bengal on the other hand, topped Group C with 20 points from six matches. It was believed that Sourav Ganguly, the President of Cricket Association of Bengal (CAB) had flown to Delhi to hand the Bengal team some tips to tackle Dhoni . Sourav has already discussed a few plans on how to tackle the Dhoni threat with Manoj and Sairaj. No doubt Dhoni is a formidable player but it s not impossible to get him out. Dada will be meeting the team in the evening today and will also be present at the ground tomorrow [on Friday], a Bengal team source told PTI on the condition of anonymity.

Fire breaks out at Jharkhand Hotel in Dwarka, #VijayHazare Trophy semifinal between Bengal and Jharkhand postponed.

Jharkhand did well even in the Ranji Trophy 2016-17. They made it to the semi-final for the very first time in the history, but could not progress any further.

(With inputs from PTI and IANS) 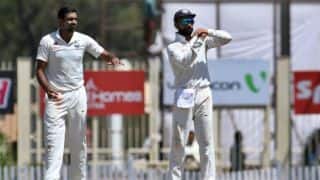 India vs Australia: Virat Kohli warms up, but does not take field on Day 2, 3rd Test