A fire incident at the Western Australia Cricket Association ground in Perth resulted in an early lunch on the opening day of a Sheffield Shield match on Thursday.

A fire incident at the Western Australia Cricket Association ground in Perth resulted in an early lunch on the opening day of a Sheffield Shield match on Thursday. The play was halted before lunch after fire broke out behind the player’s pavilion.

According the cricket.com.au, as Tasmania bowler Jackson Bird was in his run-up for the fifth delivery, smoke was spotted coming out behind the dressing room. On-field umpire Nathan Johnson called it a dead ball before eventually suspending the play altogether.

The players were apparently unaware of the reason behind the interruption and then square leg umpire Paul Wilson explained the situation to the fielders before everyone including the players and officials headed off the field. The umpires called lunch at 12: 25 pm (local time), five minutes ahead of the schedule.

“The fire outside the back of the Players Pavilion was caused by air conditioning unit and is now under control. Fire services are on site and have assessed the situation. Players have been allowed back into the Pavilion for lunch. Play will resume at 1:10pm” the WACA said in the statement.

According the report, a faulty air conditioning unit was the reason for the small fire which was brought under control.

This is not the first time a Sheffield Shield fixture, Australia’s domestic red-ball competition, was affected by fire. Offspinner Nathan Lyon had set off a fire alarm Brisbane after burning a piece of toast which resulted in an entire stand being evacuated and the play being halt for 30 minutes. 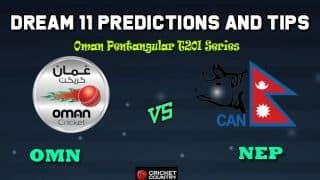