It has been learnt that as he was getting ready to have lunch, MV Sridhar succumbed to a massive heart attack.

New Delhi: Former BCCI General Manager Dr MV Sridhar, who had recently resigned from his position, passed away on Monday at his Hyderabad residence following a massive cardiac arrest. He was 51 and was in charge of BCCI’s cricket operations till September for nearly four years. It has been learnt that as he was getting ready to have lunch, Sridhar succumbed to a massive heart attack. Sridhar was one of the pillars of Hyderabad cricket during the 1990’s and was also one of their better captains. With Mohammed Azharuddin busy on national duty for most of the 90’s, it was Sridhar and Abdul Azeem, who shouldered the burden of Hyderabad batting during that phase. BCCI seeks MV Sridhar s replacement

A right-handed opening batsman, Sridhar played 97 first- class matches for Hyderabad and South Zone, scoring 6701 runs at a healthy average of 48.91. His highest individual score was 366. Being a top level first-class player helped Sridhar understand the demands of a professional cricketer. Sridhar, on many occasions, was BCCI’s ‘Go To Man’ in crisis situations. His role as an administrative manager in Australia during the infamous ‘Monkeygate’ involving Harbhajan Singh and Andrew Symonds was laudable. Sridhar was there throughout the hearing and was the link between the team and the board. MV Sridhar steps down as BCCI s GM cricket operations

In July 2017, Sridhar was sent to the West Indies by the Indian Cricket Board following Anil Kumble’s resignation, after his much-publicised differences with skipper Virat Kohli. While Sanjay Bangar handled the coaching, Sridhar was sent to the Caribbean to have the players in good frame of mind and also get a first-hand account of their requirements.

Sridhar was also the secretary of the Hyderabad CA and it is this stint which was controversial with allegations of his involvement with multiple clubs. There were conflict of interest allegations levelled against him. This was the primary reason that he resigned from GM’s (Cricket Operations) post. A genial man, Sridhar or ‘Doc’, as he was fondly known in the fraternity, was always accessible regarding any cricket- related issue.

TOPICS:
India BCCI Board of Control for Cricket in India MV Sridhar MV Sridhar passes away 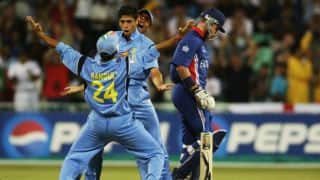