A member of Somerset Disabled CC, Russ says cricket saved his life after a serious injury.

TAUNTON: “Welcome to Taunton! Home of Brian the Cat! Best county ground in the country!”

Russ Young, an amputee, is welcoming every person who enters the County Ground an hour before match 23 of the ICC Cricket World Cup 2019. He’s a member of the 4,000-strong World Cup Cricketeers, a group of volunteers doing very good and appreciated work across the United Kingdom this summer.

“Cricket saved my life,” says Russ. “It really did. If not for cricket, I’d be …” He points a finger skywards.

A few years ago, Russ suffered an accident that has left him an amputee. In a very serious mishap, two tonnes of wood fell on his left leg and resulted in it being amputated. He went into a dark space, he admits, but matters took a turn for the better – in all aspects of the term – when a friend asked him if he’d like to play cricket for the Somerset Disabled Cricket Club.

“Cricket?” Russ remembered how he’d reacted. “I’d played a bit in school, but I was useless. But when my mate asked me, I said I would give it a go. My life had been turned upside down. I was really down, depressed. It wasn’t healthy. Then cricket came into my life and changed me. I mean it. Cricket has given me so much. I love cricket. I owe cricket a lot.”

“I’m a wicketkeeper, as you can see,” he says jovially as he gestures to his left leg. “I couldn’t bat in school, and still can’t. We just played a match yesterday. We chased 151 with eight wickets remaining, in 19 overs. It was great.”

For Russ, the son of a retired Royal Air Force staff, giving back to cricket motivates him to no end.

“It’s tough, mate, to be disabled in this country. My wife, she’s my rock,” says Russ. “I’m giving back to the community because the community was there for me [when I had my accident]. And cricket, it needs to be fostered. Kids need to to learn it, play it and respect it. It’s a great sport, it teaches you so many things. It teaches you to be positive, to be confident, to be a team player, to be disciplined … oh, I could go on.”

Full of positivity, Russ will never forget Monday June 17. He’s been chosen to carry out the Cricket World Cup trophy in the customary pre-match ritual. Russ is overwhelmed with emotion. He is elated, honoured, humbled and nervous.

“What an honour,” he says. “Just unbelievable that I was picked to carry out the World Cup. I’m buzzing.”

Russ can’t stay still as he stands inside the boundary line waiting for the World Cup trophy to be handed over. He shuffles, his fingers fidget as he tries to keep his hands still by his side. When he receives the World Cup, Russ beams. It’s a huge moment of happiness.

He walks onto the field, holding up cricket’s greatest prize, and the spectators gathered inside the County Ground in Taunton clap. After taking the trophy out to the middle of the field, Russ walks back. The pure unadulterated happiness on his face is palpable. Mid-way back to the boundary, he looks upwards and heaves a deep breathe in a release of emotion.

A moment later, Russ stands on the boundary line. His eyes are moist. His face is flushed. Again, he cannot stay still.

Niall O’Brien, the former Ireland cricketer, walks up to Russ and shakes his hand. They walk off together, to do a brief TV chat.

Russ’ wife is here to watch her husband on this special day. This is her first time at a live international cricket match.

“After the match, we’re going to this lovely Indian restaurant down the road, run by a Bangladeshi. Great food, spicy!” says Russ, with a smile. “Right, mate, I’ve got to get back to work.”

Spotting a group of Bangladesh cricket fans taking selfies near a mascot, Russ walks up and gets them even more animated. “Give me a cheer! Give me a roar!” he yells, and the fans respond in full enthusiasm. 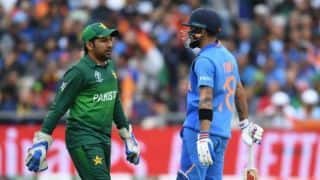