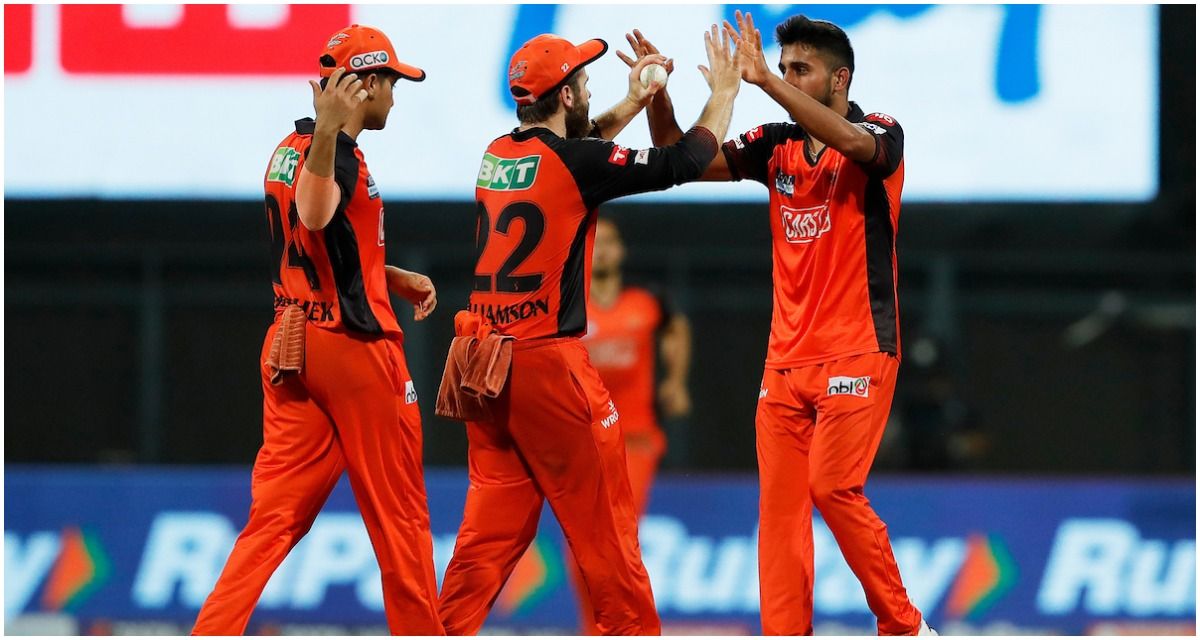 Mumbai, May 17: Rahul Tripathi batted like a man on a mission before Umran Malik sizzled with his pace as Sunrisers Hyderabad kept their slim IPL playoff hopes alive with a three-run win over Mumbai Indians here on Tuesday.

Tripathi scored 76 from 44 balls to guide Sunrisers Hyderabad to a challenging 193 for six. He was ably complemented by Priyam Garg (42) and Nicholas Pooran (38).

Malik (3/23 in three overs) then produced a sensational performance, while the seasoned Bhuvneshwar Kumar (1/26 off 4) bowled a wicket maiden in the crucial 19th over to stop MI at 190 for seven despite the best efforts by Rohit Sharma (48), Ishan Kishan (43) and Tim David (46).

The victory keeps SRH in the playoffs race on paper as they move up to 12 points. They need to win their last game and hope for other results to go their way.

Chasing 194, Rohit was at his effortless best and looked set for a big score. He gave a solid start to Mumbai’s chase alongside Kishan, with whom he shared a 95-run opening stand.

The two plundered 17 runs in the ninth over bowled by Malik, with the pacer guilty of bowling two no balls and a wide.

But two overs later, Kane Williamson’s decision to bowl Washington Sundar (1/36) paid dividends as Rohit holed out to Jagadeesha Suchith in the deep.

Kishan, who looked uncomfortable against Malik’s short balls, followed his skipper in the next over as the Jammu pacer, who had a horrible first over, redeemed himself. He speared the ball at the stumps from round the wicket for Priyam Garg to complete a fine catch at mid on.

The duo provided another breakthrough as Malik bowled another bouncer forcing Daniel Sams to pull. Garg jumped high above his head with his arms fully stretched to complete a brilliant catch at midwicket.

With 44 needed off 18, the big-hitting David blazed away to 46 off just 18 balls to keep alive Mumbai’s hope for a fourth win this season.

David hit four sixes off the 18th over bowled by T Natarajan, including a monstrous 114m hit, to bring the equation down to 19 from 12. However, Natarajan (0/60) managed to redeem himself off the last ball as David was run out.

The seasoned Bhuvneshwar bowled a wicket maiden 19th over to tilt the game back in SRH’s favour.

Earlier, Tripathi, who struck his third half century of the season with the help of nine fours and three sixes, set himself up brilliantly for a memorable knock.

Invited to bat, the Sunrisers’ gamble to play Garg at the top of the order paid off. The 21-year-old played a fine knock while sharing a 78-run partnership with Tripathi after the in-form Abhishek Sharma (9) was sent back in the third over.

Garg, who was dropped on 10, made good use of his reprieve as he smashed the ball four times to the fence and twice over it in his 26-ball innings.

At the other end, Tripathi looked in his element. He smacked Jasprit Bumrah (1/32) for a six and back-to-back fours in the fifth over.

Tripathi and Garg collected 57 in a productive powerplay and maintained a healthy run rate which was close to 10 runs per over while batting responsibly.

Once Garg was caught and bowled by medium pacer Ramandeep Singh (3/20), Pooran, who was promoted to No. 3, joined the party.

The flamboyant left-hander smoked two consecutive sixes over long on and deep backward square off Riley Merdith (1/44) in the 13th over before whacking Mayank Markande (0/31) for a boundary and a maximum in the next over.

The MI bowlers, led by Ramndeep, were able to stage a mini comeback as they got rid of Pooran, Tripathi and Aiden Markram (2) in the space of eight balls.

Batting down the order, skipper Kane Williamson’s (8 not out) struggles continued as he was unable to get the big shots going.

The Sunrisers, who were looking set for a 200 plus score, could manage only one boundary in the last two overs, which yielded 19 runs. 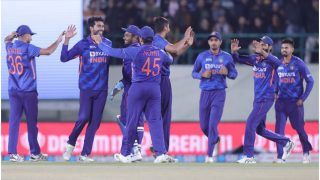 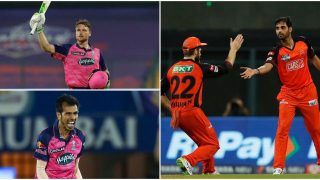