Following Supreme Court's approval of BCCI's new draft constitution with some slight alternations, it has been learnt that Sourav Ganguly might take over as the next president of the BCCI.

Following Supreme Court’s approval of BCCI’s new draft constitution with some slight alternations, it has been learnt that Sourav Ganguly might take over as the next president of the board. A report in the New Indian Express suggests that the former Indian captain might be the next in line to replace acting president CK Khanna.

As per the new constitution, there must be a mandatory cooling-off period of three years for officials who have served a term of three years. Ganguly, currently serving as president of the Cricket Association of Bengal, is being looked as a prime contender as he is eligible to contest the elections without taking a cooling-off break.

“He is definitely eligible and ticks most of the boxes,” said a senior BCCI functionary.

Ganguly, having served positions with the BCCI’s technical committee, IPL Governing Council, cricket advisory committee and the Lodha Commission, possesses the credentials needed to be at the board’s helm and is reportedly in good books of the administrators.

Reports of Ganguly taking over as the BCCI chief had previously emerged in late 2015, when Jagmohan Dalmiya, into his second stint as president, passed away due to cardiac arrest. But it was Anurag Thakur who took over the post in May of 2016 and remained the person in charge until the Supreme Court sacked him in 2017.

Ganguly is into his fourth term as CAB president. However, if the BCCI post does indeed go to Ganguly, he will have to give up his role with the state board. It shall also, in all probability, end Ganguly’s role as a television commentator, which he is currently serving during India’s tour of England.

With over 18000 international runs, Ganguly was considered one of the best Indian captains. He led the side from 2000 to 2005, during which the team reached the final of the 2003 World Cup and put up impressive performances in Australia and England in the mid-2000s. 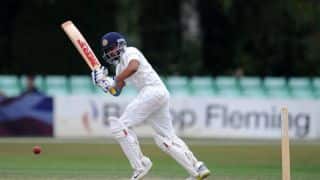