New Zealand coach Gary Stead has denied any arm-twisting from Kane Williamson to include Ish Sodhi in the Black Caps’ 15-man squad for the 2019 ICC Cricket World Cup, which was announced on Wednesday, and that he is “absolutely” happy with taking the legspinner to England.

Reports in the New Zealand media a day before the squad was announced suggested that Williamson had pushed for Sodhi’s inclusion over Todd Astle, who had played ODIs and Tests recently, but Stead rubbished any such claims. (READ: New Zealand pick Tom Blundell, Ish Sodhi for World Cup)

“The composition of the leg spinners was very tough and both had signs at times that they should’ve been the one that was selected,” he told reporters at Tai Tapu School in Canterbury, where New Zealand’s squad was unveiled three weeks before the April 23 deadline.

“We consult widely with [selections] and Kane is clearly a person that has input into that… but at the end of the day that’s my call to make. I think it’s great that the captain has input because they’re the guys that are out on the field but ultimately the decision comes back to [selector] Gavin Larson and myself to make that call.”

The selectors also named the uncapped wicketkeeper-batsman Tom Blundell as understudy to Tom Latham at the World Cup, despite Tim Siefert keeping wickets in ODIs and T20Is this year.

“If there was an injury to Tom Latham, he would fit directly into the role we saw there and then could bat in that position as well,” said Stead. 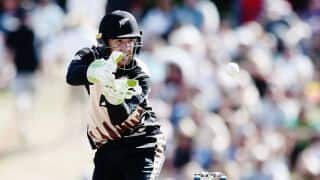