Sehwag reminded all and sundry just how dangerous a batsman he still is with a characteristic knock of 36 off 19.

George Bailey led from the front as Kings XI Punjab (KXIP) reached 177 for five against Mumbai Indians (MI) in Match 7 of Indian Premier League (IPL) 2015 at Mumbai on Sunday. Virender Sehwag reminded all and sundry just how dangerous a batsman he still is with a characteristic knock of 36 off 19 balls, but the rest of the batting floundered till Bailey’s late surge. Live Updates: Mumbai Indians (MI) vs Kings XI Punjab (KXIP) IPL 2015 Match 7 at Mumbai

Sehwag and Murali Vijay came out to open the innings and started off a break-neck speed. The duo added 60 in under seven overs, with Sehwag whacking six fours and a six to make the MI bowlers run for cover. He was dismissed holing out to Kieron Pollard off Harbhajan Singh. Glenn Maxwell came in at No. 3 but failed to recreate his magic of IPL 2014, top-edging an attempted slog off J Suchith to Ambati Rayudu at midwicket. Live Scorecard: Mumbai Indians (MI) vs Kings XI Punjab (KXIP) IPL 2015 Match 7 at Mumbai

At 68 for two, Vijay and David Miller needed to consolidate. Unfortunately for KXIP, Vijay got carried away after playing some good shots and pulled Harbhajan to Suchith. Miller and Bailey chose to take their time after that, building the innings rather than hitting out. However, just when Miller was looking to accelerate he was snapped up by Lasith Malinga for a 23-ball 24. Rishi Dhawan soon followed suit, as KXIP were reduced to 150 for five. IPL 2015 Previews

Bailey then took charge, essaying the role Maxwell and Miller are used to playing for KXIP. He made his highest IPL score and his maiden IPL half-century. Bailey was calm as ever, but played some massive shots as well. His smile never left his face, as he treated the pacers with disdain to go big over the leg-side arc. IPL 2015 schedule: IPL 8 match time table with venue details

Earlier, Rohit Sharma won the toss and decided MI would field against KXIP. Both teams made changes to their sides from their respective first games, with KXIP bringing in Rishi Dhawan for Karanveer Singh, and MI opting for Pawan Suyal and J Suchith ahead of Pragyan Ojha and Jasprit Bumrah. Indian Premier League (IPL) 2015: Complete coverage 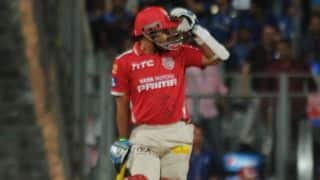