Maxwell says he was amazed after watching Brendon McCullum score a triple hundred against India.

In three innings since the resumption of the Sheffield Shield, Maxwell’s 340 runs showed that he too is capable of producing innings of substance amid the fireworks and he sealed off that intent by signing with county side Hampshire with the intention of playing First-class cricket as well as the short formats.

According to the Sydney Morning Herald, McCullum, who owns two of the top five scores in Twenty20 internationals, batted for almost 13 hours in Wellington to make 302, the first by a Kiwi batsman, and Maxwell said that it is amazing to see that the skipper still had the concentration to keep going despite facing 580 balls.

Maxwell also said that McCullum was still leaving balls well and watching the line and hitting the ball on its merits, adding that he has also been heavily involved in T20 cricket and sought after by Indian Premier League (IPL) teams.

Hoping to follow in his new idol’s footsteps, Maxwell also said that he is inspired by McCullum’s easy adaptability between the formats, adding that although McCullum has still got the aggressive shots, it does not take away from his natural flair as he harnesses it a lot better than most players. 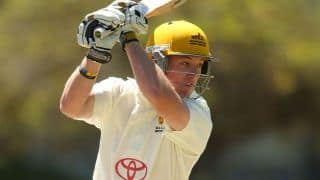