Glenn Maxwell batted Australia through a period of great pressure and emerged victorious in the end.

Australia have won the third One-Day International (ODI) of the five-match series against India at Melbourne in dramatic fashion. Glenn Maxwell was the hero of the chase as he batted is a situation where the pressure was on the Australians but he kept his calm and played a fine innings. There were contributions from Shaun Marsh and Steven Smith but Maxwell eclipsed their effort by a good margin. Ravindra Jadeja was the best bowler for India on a pitch that offered some turn, but ultimately his productive spell failed to help India defend 295. FULL CRICKET SCORECARD: India vs Australia 2015-16, 3rd ODI at MCG

Australia had quite a convincing start to their chase of 296 with Aaron Finch and Shaun Marsh playing a some excellent shots upfront. The Indian fast bowlers lacked any consistency and accuracy initially. Umesh Yadav bowled a few good deliveries in his first spell but invariably conceded one bad ball which released the pressure created. The case was similar with the other fast bowlers. Barinder Sran looked off-colour failing to get substantial speed or accuracy. FULL UPDATES: India vs Australia 2015-16, 3rd ODI at MCG

Yadav got repaid for his good deliveries in the very first ball of the next spell. Finch got an away-swinging delivery off a good length and he tried to drive it but got the edge to the keeper. That was India’s first breakthrough. Australia skipper Steven Smith was the next man in. He looked in his usual sublime form. He scored runs at an appreciable rate and Shaun contributed well at the other end. ALSO READ: India’s pace-bowling inconsistencies, as underlined in India vs Australia 2015-16 series, cause for great alarm

India had to wait long before the next breakthrough came but when it happened things started to tick for them. Jadeja bowled a ripper to dismiss Smith. He got a ball angled in on line just outside off stump and it held it’s line beautifully after pitching. Smith got the outside edge to Ajinkya Rahane at first slip.

George Bailey was the next man in and looked ominous during his knock of 21 but he was done in by an absolute ripper by Jadeja. The ball drifted in on a fullish length on an off stump line. Bailey attempted to drive it, but it ripped off the surface cruelly. Bailey missed and Dhoni collected the ball to whip the stumps off before Bailey could get his back leg in.

Shaun who had played so well was the next man to fall. He got a fine delivery from an erratic Ishant and the extra bounce off the surface was his undoing. He was dismissed for 62. Maxwell and Mitchell Marsh were at the crease now. They looked really good together and it appeared as if they would take Australia to safety without further hurdle.

However Mitchell was done in by an athletic bit of fielding from Yadav! Maxwell drove a ball to long off and Yadav gave chase, the batsmen set out for the third run. It looked like they would make it comfortably but Yadav shot in a fantastic throw to wicket-keeper Dhoni and as he whipped the bails of Marsh was still out of his crease!

Once again the match was in the balance. Maxwell played a very responsible innings in the meanwhile. He reduced the frequency of unconventional shots and was focused on getting the job done. He let no opportunity to score go without cashing in. However, another wicket fell at the other end soon after.

Wicket-keeper Matthew Wade never really looked well settled and was dismissed by Ishant for just 6. At this stage Australia still needed over 90 runs at more than run-a-ball. James Faulkner was the next man in. Faulkner identified that Maxwell was in great form and did the wise thing of giving strike to the Maxwell as far as possible.

Maxwell was absolutely resolute in the way he was to go with the match. He kept the singles coming but attacked whenever the bad ball came. He took a liking to anything short or excessively full. His dealing with the pressure of the game was simply fantastic. Ultimately, he got the required rate down to less than six with Faulkner still at the other end.

He finally perished with Australia needing one run to win. He tried to get a boundary in order to complete what would have been a much-deserved hundred. But Australia needing only one more run for victory meant he would have to go for a big hit. He did and got a leading edge and was caught by Dhawan. However the match was secure in Australia’s favour by then.

Earlier India scored 295 for six in their stipulated fifty overs. The innings’ hero was Virat Kohli who scored 117 runs at a strike-rate of 100. He’s effort was helped by half centuries from Dhawan and Rahane. The Australian bowlers did well in the death following up from their great effort in the second ODI at Brisbane. India got to a considerably imposing score at MCG but once again their bowlers let them down. 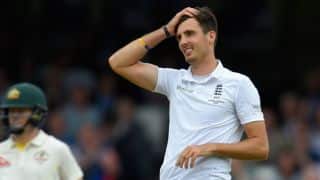 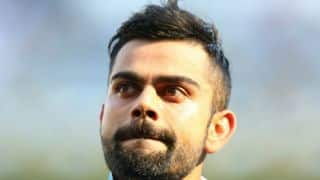 Virat Kohli to James Faulkner: Just go and bowl, I have smashed you enough in my life