Senior BJP leader Gopinath Munde on Tuesday became the first political bigwig to file his nomination to contest for the presidentship of the Mumbai Cricket Association at its biennial election which is scheduled on October 18. 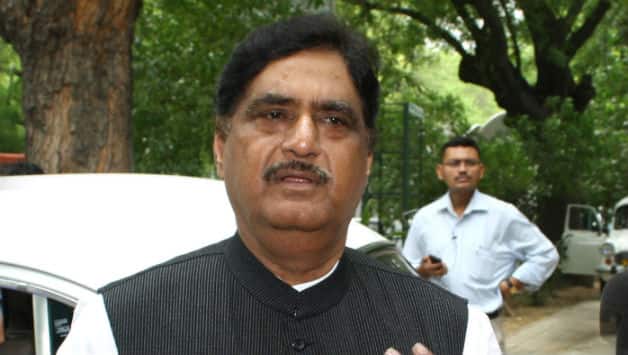 Gopinath Munde became the first politician to file his nomination for the Presidential polls. The senior member of BJP said that he is keen to address a lot of issues faced by Mumbai Cricket Association © IANS

Senior BJP leader Gopinath Munde on Tuesday became the first political bigwig to file his nomination to contest for the presidentship of the Mumbai Cricket Association (MCA) at its biennial election which is scheduled on October 18.

“There are a lot of issues facing the MCA’s clubs and members. They lack facilities and I want to improve them. That’s one of the reasons I want to contest the elections,” Munde told reporters after filing his nomination at the MCA office.

Asked whether he would be contesting against another big Maharashtra politician Sharad Pawar, who has also evinced interest to return to the helm of MCA, the BJP Deputy Leader in Lok Sabha said, “I am the first to file the nomination for president. I don’t know about Mr Pawar.”

“Mr Munde filed his nomination today [Tuesday]. He is contesting as an independent. So far there is no other nomination for the president’s post,” said MCA Joint Secretary Dr P V Shetty.

The last date for nomination is October 11. The papers would be scrutinised on October 12 and withdrawals, if any, would take place on October 15.

According to rules, a candidate needs representation of an MCA-affiliated club to contest polls.

A local club, Stylo Cricket Club from Mazgaon, had forwarded Munde’s name to MCA last month saying the former Deputy Chief Minister of Maharashtra would represent it at the election.

The interest in the election had shot up when the Mazgaon Cricket Club sent a letter to the association, saying Maharashtra Chief Minister Prithviraj Chavan, who belongs to Congress, would represent the club.

Incidentally, both these clubs from Mazgaon are owned by the same person, according to MCA sources.

Union Agriculture Minister Pawar’s name has already been sent to the MCA for the elections as a representative of another club. Pawar, a former president of the BCCI and also the ICC, has been extended support by two groups contesting the polls.

One group is headed by Vijay Patil and the other comprises sitting president Ravi Savant and a few other office bearers – including both joint secretaries Nitin Dalal and Dr P V Shetty.

Former India captain Dilip Vengsarkar is also one of the voters in the elections along with his wife Manali.

While the former chairman of national selection committee would be representing the club for which he had played all his career, Dadar Union, Manali is to represent her husband’s cricket foundation, according to MCA sources.

For two decades — from 1992-93 to 2012-13 till Savant took over when Vilasrao Deshmukh who was still in office passed away, the MCA has been headed by politicians.

Pawar was at the helm of MCA for a decade till Deshmukh took over.