Australian selector Greg Chappell has said that bowling all-rounder Mitch Marsh may be considered for the position of vice captain for Australia‘s next Test series against Pakistan in the UAE. The selectors – Trevor Hohns, Greg Chappell and Justin Langer will begin discussing this week about who should be Tim Paine’s deputy in the important Test series against Pakistan.

In the backdrop of the year-long suspension of Steve Smith and David Warner after the ball-tampering scandal in South Africa, there is a need for Australia to enable potential candidates who can don national leadership roles in the future. Marsh’s name for vice captaincy has come up as he leads Western Australia in the Sheffield Shield and he is also leading Australia ‘A’ in their series against India ‘A’ in India next month. However, paceman Josh Hazlewood who has played 40 Tests, has also declared his interest, while nominating veteran spinner Nathan Lyon and spearhead Mitch Starc as contenders. Victorian captain Peter Handscomb is also a leader-in-waiting but needs to first consolidate his spot in the Test side.

“Historically, Australia has been pretty well served. When we have been in need of a leader, there has always been one who has emerged. I have no doubt this will be exactly the same,” Chappell said. “We do have three or four guys who are going to be quite capable. There is an opportunity for them to get some experience in leadership roles. You want all players to take leadership roles but you do need these guys to have the more senior roles,” he added.

“We want to give them leadership opportunities and [Marsh] is one that has got that opportunity. He is captaining Western Australia and he has been identified as a leader for the future,” Chappell told Fairfax Media. “He will get that opportunity [against India A] and I am sure he will do a good job. I saw him at the under-19 level, he has got some natural leadership skills. The more opportunities he gets, the better he will get at it. Historically, we pick our team, then we pick our leaders. It needs to be somebody who can command a regular spot,” the national selector added.

Chappell also had a word for Smith and Warner who performed reasonably well in the Twenty20 tournaments held recently, to be welcomed back into the fold once their suspension ends.

“I would have thought so. Again, it will depend on form but you would expect them both to be able to get back into pretty good form. It’s not like they won’t be playing cricket at all. They will be ready to go. I am sure if they are in form, they will be welcomed back,” Chappell said. 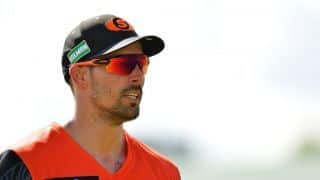