Pujara has played in the IPL in the past for several teams such as Kings XI Punjab (KXIP), Kolkata Knight Riders and Royal Challengers Bangalore (RCB). H

India’s Test star Cheteshwar Pujara made it to the Saurashtra Cricket Association (SCA) Stadium in Rajkot on Friday, albeit to watch the Indian Premier League (IPL) 2017 match between Gujarat Lions (GL) and Kolkata Knight Riders (KKR). Pujara, who was unsold in the IPL 2017 auction held in February, found no takers despite a splendid run in the home season for the Indian cricket team, shattering several records with the bat. Pujara’s base price was INR 50 lakhs in the IPL 10 auction, but he remained unsold and was thus confined to the viewing area and not the cricket field as the local side began their IPL campaign. FULL CRICKET SCORECARD: GL vs KKR

Pujara has played in the IPL in the past for several teams such as Kings XI Punjab (KXIP), Kolkata Knight Riders and Royal Challengers Bangalore (RCB). However, the batsman who managed to trump the run-machine in Virat Kohli during India’s marathon Test season at home comprising 13 Tests was denied a chance to play in IPL 2017. Pujara scored 1,316 runs in the ‘India Cricket’ season, wherein he scored centuries against New Zealand, England and Australia. At Ranchi against Australia, Pujara even became the only Indian batsman to face more than 500 balls in a Test innings, scoring a 525-ball 202.

Pujara’s performances against Australia helped him move past Kohli in the ICC Rankings for batsmen in Test cricket. Pujara is currently at No. 2, with Kohli’s juggernaut with the bat coming to a halt with an ordinary series against Australia, wherein he missed the final Test as well. 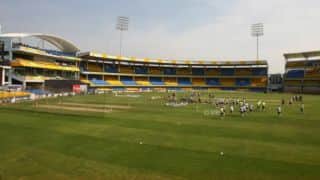