After 56 league matches we have now come down to Qualifier 1 of Indian Premier League (IPL) 2016 where Gujarat Lions will take on Royal Challengers Bangalore at Bengaluru.

After 56 league matches we have now come down to the final four teams in Indian Premier League (IPL) 2016. First-timers Gujarat Lions (GL) will take on Royal Challengers Bangalore (RCB) at the latter’s home ground of Bengaluru in Qualifier 1. RCB have been on a roll, winning their last four matches in a row to leapfrog from the bottom half of the table straight up to No. 2. GL, who are at the top of the table, have had a much rougher journey to the top in their last few games. Live Cricket Scorecard: Gujarat Lions vs Royal Challengers Bangalore, IPL 2016 Qualifier 1 at Bengaluru

RCB will be immensely confident at the moment, mainly because their talismanic captain Virat Kohli has been in the form of his life. Kohli has scored four centuries so far in IPL 2016, of which two have come against GL. With the kind of form he is in, it will not be beyond belief if he makes it three in three. The RCB bowling attack had let Kohli and RCB down in the first match they played against GL, but the insane hitting of Kohli and AB de Villiers in the next match helped RCB to the biggest-ever win in terms of runs in IPL history. READ: Virat Kohli’s romance with bowlers in IPL 2016: Statistical analysis

With Chris Gayle also starting to show some form and KL Rahul proving himself an excellent addition to RCB, their batting line-up continues to look the most intimidating one on paper in IPL 9. But it is really Kohli on whom the GL bowlers will focus. The law of averages have to catch up with him some time, but for now Kohli does not seem to be bound by the laws of humankind. READ: Virat Kohli continues to defy reality in IPL 2016

The fact that RCB’s bowlers have now started coming into their own — Yuzvendra Chahal currently holds the Purple Cap, with Shane Watson close at his heels — makes them the clear favourites for this match. The trio of Gayle, de Villiers, and Rahul to back up Kohli will continue giving GL nightmares. READ: Virat Kohli then and now: An analysis of the changes since England Tour 2014

Meanwhile Suresh Raina has turned around his form for GL and has scored a couple of good half-centuries to get some momentum going into the playoffs. Brendon McCullum, Dwayne Smith, and Aaron Finch have all been good but their inconsistency has been a problem. Dinesh Karthik too has looked good, so the initial weaknesses of GL’s top-heavy batting order have since abated. READ: Virat Kohli and the bat of destiny: RCB’s Deathly Hallow in IPL 2016

GL still have a good bowling attack with Ravindra Jadeja, Dwayne Bravo, Praveen Kumar, Dhawal Kulkarni, Shivil Kaushik, and Smith combining well to restrict the opposition on most occasions. They will hope they can go past Kohli early this time around. 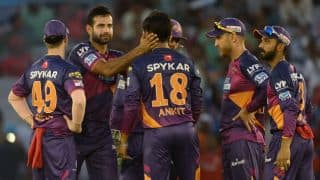