Afghanistan rode swiftly to victory by two wickets in a thriller against Zimbabwe in the fifth and final ODI at Sharjah.

Afghanistan middle-order batsman Gulbadin Naib played a match-winning knock of 82 as Afghanistan rode swiftly to victory by two wickets in a thriller against Zimbabwe in the fifth and final One-Day International (ODI) series at the Sharjah Cricket Association Stadium on Wednesday. Earlier, Zimbabwe skipper Elton Chigumbura won the toss and elected to bat first, as they posted a challenging total of 248, following a brilliant knock from veteran batsman Hamilton Masakadza, who scored his fourth ODI ton after five and a half-years, which eventually went in vain. FULL CRICKET SCORECARD: Afghanistan vs Zimbabwe, Live Score, 5th ODI match

Afghanistan began their chase on a steady note as the openers aloost put up an opening 50-run stand, only the partnership to be broken on 49, when Mohammad Shahzad was bowled by Luke Jongwe for 25 in the ninth over. In came Nawroz Mangal, but could hardly last long and was dismissed by the same man for a mere couple at the score of 59, and soon to follow him after seven runs was opener Noor Ali Zadran, who fell for a healthy 30 to Jongwe again in the 13th over. FULL CRICKET UPDATES: Afghanistan vs Zimbabwe 2015-16, 5th ODI at Sharjah

However, it was soon followed by an impressive 55-run stand for the fourth wicket between Nabi and Hashmatullah Shahidi, who seemed to be batting good and also brought up the 100 runs for Afghanistan, but the partnership broke at a crucial point Nabi being dismissed in the 26th over by Graeme Cremer, who trapped him leg before for 26, and the very next over saw the dismissal of Shahidi, who fell for a healthy 32 to Sikandar Raza, who bowled him out, as the score read 121 for the loss of five. It was followed by a brief 25-run stand between two new batsmen in the form of skipper Asghar Stanikzai and Gulbadin Naib, before Stanikzai fell in the 35th over to Raza.

However, the biggest partnership of the innings came when Naib and Rashid Khan put up a whopping 85-run stand for the seventh wicket, before Rashid was dismissed by Neville Madziva for 31 in the 48th over. However, Afghanistan had more or less come close towards the victory, as Naib ahd eventually brought up his maiden ODI half-century off the same amount of deliveries, including a boundary and five huge sixes. The very same over saw the dismissal of Mirwais Ashraf for a golden duck, but it was the final pair of Naib and Dawlat Zadran who made it through the last over, as Naib brought up the winning runs in style by through a huge six off Madziva, thus helping Afghanistan register a two-wicket win over Zimbabwe, and their second consecutive ODI series win. Naib was indeed awarded the Man of the Match for his match-winning knock of 82, while Mohammad Shahzad wins the Man of the Series award. 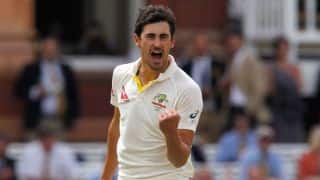