In the final of CPL 2016, Guyana Amazon Warriors will lock horns with Jamaica Tallawahs at Basseterre.

Guyana Amazon Warriors, on the other hand, have lost their third CPL final in four years.

Live cricket score | JT 30/0, 5 overs | Chadwick Walton 15 (20), Chris Gayle 14 (10): By Chris Gayle’ standards, it’s been a slow start for Jamaica Tallawahs. Given the score is paltry, they need not press the panic button and lose wickets in haste. Gayle, however, has already bludgeoned two maximums.

Live cricket score | GAW 93, 16.1 overs | JT need 94 runs to win: Four ducks in the innings and Warriors were bundled out for a paltry 93. They were pushed to further turmoil, losing 6 wickets in 6.1 overs. Sohail Tanvir top-scored with 42 off just 37 balls, inclusive of six boundaries. However, pick of the bowlers was Imad Wasim, with figures of 3 for 21.

Live cricket score | GAW 59/4, 10 overs | Christopher Barnwell 2 (4), Sohail Tanvir 29 (27): Warriors have found themselves in a spot of bother, losing two more wickets in the last 5 overs. To add to the fire, their star batsman Dwayne Smith failed to use his blade to blasting effect. Shakib Al Hasan, on the other hand, has completed his four-over quota: 4-0-25-2

Live cricket score | GAW 32/2, 5 overs | Dwayne Smith 6 (10), Sohail Tanvir 18 (12): Both teams are off to a decent start. However, given the format, run-rate of under 7 in such high-octane contest, Tallahwahs have their nose ahead of the batting team. Must say, they have been disciplined so far, keeping Warriors at bay.

OUT! Maddinson c Sangakkara b A Russell 0 (1)

We have reached the ultimate stage of the Caribbean Premier League (CPL) 2016. It’s been a spectacular league so far, so much so that the USA had the fortune to witness some top-drawer cricket on its soil. From Dwayne Smith breaking the fridge in the dugout with a might six to Andre Russell plundering his maiden T20 hundred, this year’s CPL extravaganza has scaled new heights, attracting more and more cricket fans. And, in the final, Guyana Amazon Warriors will lock horns with Jamaica Tallawahs at Basseterre. We at CricketCountry, will bring the live updates and scores of this final tie. Also read: Shane Watson’s embarrassing mistake leaves everyone laughing

In the Qualifier 2, we saw some extraordinary batting display from Russell’s blade, as he bludgeoned 100 off just 44 deliveries, inclusive of three fours and 11 sixes. Yes, he blasted 11 sixes, most of them were hit cross-batted, something the modern-day cricketers have been practising to surge in the shortest format. However, Russell’s cricketing skills aren’t limited to batting, as he went on to take two wickets, one of them being the swashbuckling Brendon McCullum.

Also read: GAW reach CPL 2016 final, beat JT by 4 wickets Had Russell not upped the ante, Tallawahs would have been at the doorstep of defeat. Nonetheless, here they are, eager to put up another stellar show and be the champions of the Caribbean.

Although they have been on song, to win the battle against the rampaging Warriors is going to be an uphill climb, as they have Devendra Bishoo, Dwayne Smith, Sohail Tanvir, Adam Zampa, Chris Lynn, among others at their disposal. Will it be Rayad Emrit’s well-balanced brigade or Chris Gayle’s star-studded team that will clinch the coveted trophy? It’s a question only time will tell.

All in all, it promised to be a beauty of a contest. 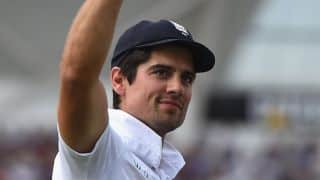