Khaleel Ahmed, the left-arm pacer, feels it has taken him longer than expected to live his dream of playing for India.

Khaleel Ahmed, the left-arm pacer, feels it has taken him longer than expected to live his dream of playing for India. As part of India s 2016 Under-19 World Cup squad, the 20-year-old fast bowler from Tonk, Rajasthan had to wait over two years to be rewarded an India berth. In between, he was part of IPL franchise Delhi Daredevils but never played a game. Even for his state team of Rajasthan, Khaleel wasn t a top preference.

Finally, it was during the 2017-18 Syed Mushtaq Ali Trophy where Khaleel made a big impact, taking 17 wickets in ten games at an impressive economy rate of 6.76 runs per over and was subsequently named in India s Asia Cup squad earlier in September.

“If I had not played for India now, then it would have been very late. I fear at an older age, my body wouldn t have been able to exert as much as I can now,” Khaleel told Times of India in an interview. “I couldn t sleep during the Syed Mushtaq Ali tournament. I would check the clock all night and waited to get back on the field, bowling fast and taking wickets. I couldn t let this opportunity go like I did in Ranji Trophy.”

Known for working closely with former India fast bowler Zaheer Khan, Khaleel revealed watching his idol bowl in the nets for a big source of inspiration. “I worked on my bowling. I went to the NCA but there were no specialist bowling coaches. I had chats with Zaheer Khan at Daredevils but felt I shouldn t be calling all the time. I observed him in the nets and tried to copy things in my hometown,” Khaleel said.

Khaleel has since come a long way. Making his India debut during the Asia Cup, Khaleel picked up 3 for 48 against Hong Kong in a game where India were almost given a scare by the Associate nation. Then, in the final two ODIs against West Indies, Khaleel bowled two fabulous spells of 3 for 13 and 2 for 29. The kind of potential he has shown in such short time, Khaleel might as well have ended India s search for the next premier left-arm seamer.

Khaleel has received plenty of thoughts and advices, one of them coming from former Pakistan fast bowler Shoaib Akhtar, who asked him to reduce his jump. “I did reduce my jump earlier to get the ball swinging in to the batsman. But Bharat Arun (India bowling coach) doesn t force me to do things. He only works on those things which would suit my physique and ability. I am happy with that. I figured I had to increase my body mass to bowl consistently at pace, Khaleel said.

“I bowled well during my U-19 days and even after that, I wasn t getting wickets. I couldn t figure out the right length. In my head, I marked the lengths Zaheer used to bowl and worked on it.” 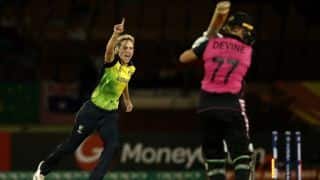