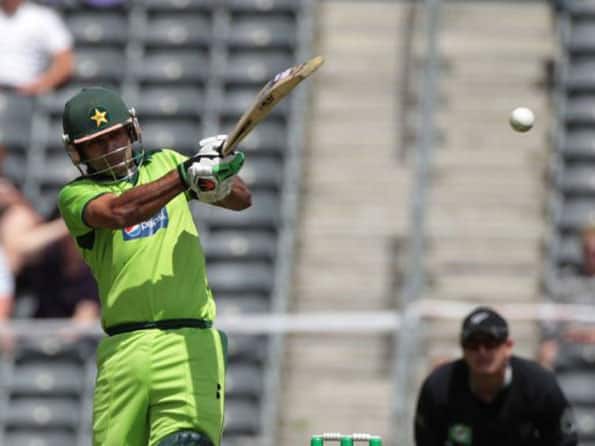 A maiden century by Mohammad Hafeez and a blistering 65 by Shahid Afridi set up Pakistan for a 43-run win over New Zealand in their one-day cricket international Saturday.

The batting heroics, which rescued Pakistan from a disastrous start, were complemented by the fielding exploits of Umar Akmal who featured in three crucial New Zealand dismissals.

The result levelled the six-match series at 1-1, with one game washed out and three to play.

It was a sharp turnaround in fortunes from the first match, which New Zealand won by nine wickets with more than 32 overs to spare.

They showed the hallmarks of that domination in Christchurch when they won the toss, put Pakistan into bat on a green-tinged wicket, and had them two for eight by the fourth over.

But from there Pakistan worked their way up to take control, compiling 293-7 in their 50 overs, with Afridi starring in a 126-run charge over the last 10 overs.

New Zealand made a bold reply and were ahead of Pakistan in the run rate until the final slog, but they lost wickets at regular intervals and were hanging on grimly at the end to be 250-9.

They were unable to take advantage of the short boundaries at AMI Stadium which Afridi plundered at will in a telling innings that included five fours and five sixes and saw him reach his half-century in only 19 deliveries.

The stage for the late charge was set by Hafeez, who was partnered by Younis Khan in a 48-run stand for the third wicket, then featured in a 94-run partnership with Misbah-ul-Haq before putting on 52 with Umar Akmal.

He belted two fours off Southee’s third over, then a four and six off Hamish Bennett’s opening over as he worked all corners of the boundary untroubled by the New Zealand bowlers who had difficulty maintaining their lines in blustery conditions.

Hafeez, who survived a dropped catch by Brendon McCullum when on 49, reached his century in the 42nd over, cutting New Zealand spin debutant Luke Woodcock to point for a single.

But he was undone on 115 two overs later when he sent a top edge to Ross Taylor at midwicket while trying to hit Kyle Mills out of the ground.

At the height of Pakistan’s late onslaught Afridi and Umar Akmal put on 69 in 4.2 overs before both were removed by Bennett who returned the figures of two for 54 while Southee took two for 57 and Mills two for 61.

The New Zealand batsmen were unable to find the boundaries with similar ease to the Pakistanis in part because of Umar Akmal’s fielding.

He caught opener Jamie How (24) with a catch on the boundary while looking into the sinking sun, leapt in the air and landed just inside the rope to catch Scott Styris and stop a six, and ran out McCullum with a pin-point throw from backward point.

How and Guptill (39) gave New Zealand a sound start to their innings but while the New Zealand batsmen were able to get starts no one was capable of establishing sound innings.

Styris top scored with 46 while the experiment of pairing McCullum (12) and Jacob Oram (17) to give the middle order substance failed to come off.

For Pakistan Umar Gul took two for 31, Wahab Riaz two for 43 and Sohail Tanvir two for 56.

The fourth match in the series will be played in Napier on Tuesday.