Hansie Cronje had ability to get the best out of his players: Gary Kirsten

Hansie Cronje had ability to get the best out of his players: Gary Kirsten

When Hansie Cronje died in an air crash 10 years ago, cricket lost an inspirational leader and the sport's most high-profile self-confessed cheat. 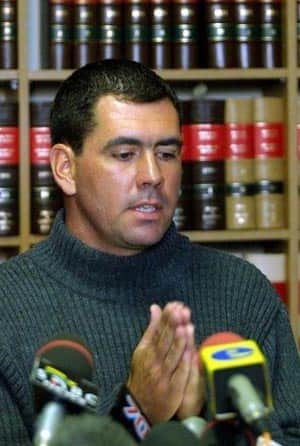 When Hansie Cronje died in an air crash 10 years ago, cricket lost an inspirational leader and the sport’s most high-profile self-confessed cheat.

“He was a great leader of people who had the ability to get the best out of his players,” said former team-mate and current South African coach Gary Kirsten when asked for his main memory of the sporting icon who was banned for life for accepting money from illegal gamblers.

Cronje, who captained South Africa to 27 wins against only 11 losses in 53 Tests before his disgrace, was the only passenger on a mail delivery flight which crashed into a mountain near his home town of George in bad weather early on June 1 2002. He was 32.

Richardson said his reaction when details were revealed of Cronje’s involvement with cricket’s underworld was “huge disappointment, a little anger and some sympathy for what you would not wish on anyone”.

But Richardson said there was a positive side to the revelations made at the King Commission, a judicial inquiry set up in South Africa in 2000 after Indian police intercepted telephone calls between Cronje and Sanjiv Chawla, a London-based gambler, during South Africa’s tour of India that year.

“Until then, most believed the problem, if there was one, was limited to the sub-continent. The King Commission dealt with the matter effectively and unambiguously. The players were investigated, were found guilty and punished.”

In addition to Cronje being banned for life, Herschelle Gibbs and Henry Williams were banned until the end of 2000 for being persuaded by Cronje to accept money in return for under-performing in a one-day international in Nagpur.

Richardson said he believed that measures taken by the ICC to combat corruption were effective.

“Today, no player in international cricket is able to say, hand on heart, he is not aware of the dangers and of his responsibilities. Unfortunately, the corrupters will not leave the players alone — the fight is ongoing.”

Kirsten agreed with Richardson that the King Commission had helped clean up the game. “It created an awareness for cricketers around the world of the consequences of getting involved in something like this.”

Ali Bacher, the former managing director of the United Cricket Board of South Africa, said he felt sorry for the Cronje family as the anniversary of the death approached.

“It is something that never escapes them.”

Bacher believes Cronje realised he was trapped and wanted to escape from the clutches of his corruptors.

“There were two incidents which, in retrospect, show how badly he wanted to get out,” said Bacher.

“The first was in 1999 when he accepted an offer to coach and play for Glamorgan in the English county championship, although he was still under contract to play for South Africa.

“At that time he was at the height of his career. I was upset with Glamorgan and managed to get them to withdraw their offer.

“The second incident was while the players were on tour in India in 2000. I forwarded a draft itinerary for a tour of Sri Lanka later that year for the captain’s approval and I got a message to say that I should send it to Shaun Pollock, the vice-captain, because he (Hansie) wouldn’t be on the tour.”

Bacher said there was much public support for Cronje at the time of the King Commission.

“A lot of people criticised me for the fact that Hansie was banned for life, although it was an ICC rule, and I believe to this day there is enormous sympathy for him.

“There was no communication between us after we handed it to the government, but he phoned me once. He sounded so bad. He was destroyed.” (AFP)