Binny has so far played 6 Tests, 14 ODIs and just 2 T20Is for India, after making his international debut in July 2014.

Indian all-rounder Stuart Binny, who was selected for their four-match Test series in the West Indies, turned 32 on Friday. Binny has been named among the 17 members that Indian selectors declared to travel to the Caribbean for the four-match Test series with a struggling West Indies cricket team. Binny made his Test debut for India on their forgettable tour of England in 2014, and he has been a regular member of the Indian team at least in the limited-overs matches. Binny has so far played 6 Tests, 14 ODIs and just 2 T20Is for India, after making his international debut in July 2014.

Binny has been a regular face of the Indian team for quite some time, but it can be said that the all-rounder is yet to make a strong mark of himself on the international circuit. A handy batsman and a key bowler in limited-overs matches, Binny has played only a few knocks of significance. On the other hand, with the ball, Binny has certainly left a lot to be desired. ALSO READ: Mayanti Langer’s fitting reply to Twitter trolls who attacked Stuart Binny

Binny has played 6 Tests so far in a career spanning close to 2 years. With the bat, he averages a moderate 21.55, with his only half-century coming at Nottingham. Binny scored 78 at Trent Bridge, and it remains his only fifty in the longest format of the game. With the ball, Binny has been ordinary, as 3 wickets in 6 Tests certainly do not speak highly for an all-rounder. ALSO READ: IPL 2016 Auction: Stuart Binny sold for Rs. 2 crores to Royal Challengers Bangalore

On the other hand, it is ODI cricket wherein the 32-year-old has performed well. With the bat, Binny averages 28.75, having scored 230 runs in 14 games with one half-century. He has taken 20 wickets in 14 ODIs, with his best-ever performance coming against Bangladesh. He grabbed 6 for 4 in a low-scoring game against Bangladesh. At Dhaka on June 17, 2014, Binny’s spell from hell — 4.4-2-4-6 — wrecked the hosts.

Binny has played only 2 T20Is, has scored 35 runs and has taken one wicket. He is a part of the Indian side for their upcoming tour of West Indies, and the all-rounder will hope to improve his numbers if given a chance. 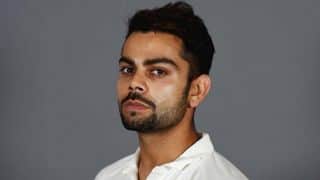