Virat Kohli turns 29. At this age, Kohli has numerous records under his belt. He is the second highest run-scorer in T20Is. In ODIs he is only behind Sachin Tendulkar (49) in terms of most hundreds (32). In addition, he already has over 15,000, and averages 50 in all the formats. Isn’t he unbelievable? Understandably, the superstar of Indian cricket is the heartthrob of the nation as well. As he turns a year older, here is a compilation of tweets from famous cricketers, film stars and fans wishing him all the luck for future endeavours:

Happy birthday Master @imVkohli May we always be in awe watching you play. Keep on inspiring us the way you do #happybirthdayvirat pic.twitter.com/6cH5LkUDTk

Wishing the best in everything you do in your life @imVkohli . May your dedication & passion continue to inspire us all.#HappyBirthdayVirat

Many happy returns of the day @imVkohli. Hope u have an amazing year. Keep making us proud. All the best for the final. #HappyBirthdayVirat

Birthday greetings to a man with amazing consistency and hunger. A genius with the bat, a man destined for greatness #HappyBirthdayVirat pic.twitter.com/hycOJcxykl

Many many happy returns of the day virat @imVkohli @ESPNcricinfo @ICC pic.twitter.com/1LizqkiZls

People want to leave everything and just watch when you walk out to bat. Happy Birthday, @imVkohli lead the team to more glories. God Bless #HapppyBirthdayViratKohli pic.twitter.com/XmpWzBV8Nx

The Indian captain is currently involved in a three-match T20I series versus New Zealand, and will look to score big and seal the series in the decider on Tuesday. 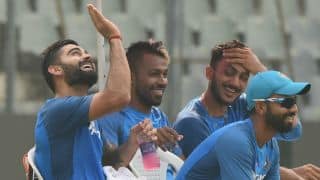