Camera shutters went click as veteran off-spinner Harbhajan Singh made his way onto the field at Eden Gardens during the camp.

Kolkata: Camera shutters went click as veteran off-spinner Harbhajan Singh made his way onto the field at Eden Gardens here on Saturday, having returned to the Indian squad after a gap of two years. For the next one and a half hours, he was the cynosure of all eyes. Read: Harbhajan Singh’s Test selection makes little sense

The 34-year-old played his last Test match against Australia in 2013 in Hyderabad. He was recalled to the Test side for the Bangladesh tour replacing left-arm spinner Ravindra Jadeja. Clad in a deep-blue jersey and shorts with a touch of fluorescent green, the ‘turbanator’ slowly made his way onto the field and inched towards the warm-up sessions with the rest of the team members. Read: India vs Bangladesh 2015: Muttiah Muralitharan backs Harbhajan Singh, Ravichandran Ashwin for Tests

After some light exercises which involved stretching, Harbhajan shifted his attention to sprinting. All members were asked to run a few metres, which was supposed to be the fitness test. Virat Kohli led with the first attempt sprinting with his mirrored wayfarers on. Harbhajan too ran hard but somehow lacked a little pace, customary of spinners which one could again gauge by leg-spinner Karn Sharma‘s sprints.

After three or four attempts, the players along with the off-spinner were allowed to sip water and energy drinks amid sultry conditions as team director Ravi Shastri and physio Nitin Patel reviewed the results of the fitness test. The session over, Harbhajan left the ground on his own, without waiting for the team bus. The team is scheduled to have a training session again on Sunday before leaving for Bangladesh on Monday morning. Read: Indian players undergo fitness tests, celebrate Ajinkya Rahane’s birthday 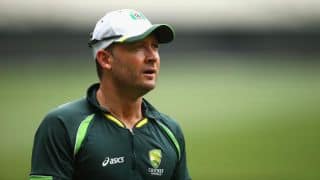 Virat Kohli's vocal support could get Ravi Shastri an extension