Rasool showed praise on the Off-Spin veteran on sharing notes on their craft.

Parvez Rasool‘s heart swells with pride when Jammu and Kashmir Chief minister Omar Abdullah tweets about him. If nothing, it motivates the star all-rounder.Of late, Rasool has been trying to add a few more weapons in his armoury. A meeting with veteran Off-Spinner Harbhajan Singh helped him learn the ‘seedha’.

Spinners love to turn the ball, but they often employ the ‘straighter one’. Rasool is happy he has learned it from the master. “Bhajji bhai taught me how to bowl a ‘seedha‘ during the recent Irani Trophy game. Now, it’s up to me to master it,” he told DNA on Saturday.

Harbhajan has rattled batsmen the world over with his straight ones. In fact, the delivery is often considered the most dangerous weapon of an off-spinner. “Bhajji bhai demonstrated the foot position along with the grip. I’ve been trying hard to master this delivery during practice sessions,” said Rasool, who is the first player from Kashmir to have made the Indian squad and played the Indian Premier League (IPL).

But Rasool is completely against the idea of changing his bowling action. In other words, he won’t do a Ravichandran Ashwin, “Variations are important, but sticking to the basics is the key to success. I would not compromise with my action at any point. At the same time, I would like to have a few more variations up my sleeve,” he said.

Rasool, who is leading J&K in the Vijay Hazare Trophy, is enjoying that “extra attention”. “It’s obvious that I get more attention, especially from people from my state. And why not?” asks Rasool, adding, “It makes me even more determined to do well and become the first cricketer from my state to play for India. Insha’Allah (God-willing), I will be able to justify this faith.”

Rasool was recently snapped up by Sunrisers Hyderabad for INR 95 lakh and he is eagerly waiting to make his mark in the IPL, “Like any other player, I, too, was excited on the day of the auction but I could not watch it because I had a flight to catch. It was only when I landed in Bangalore for the Irani Cup tie that I realised I had been bought. I received a lot of congratulatory messages,” Rasool informed. In fact, his smile said it all. 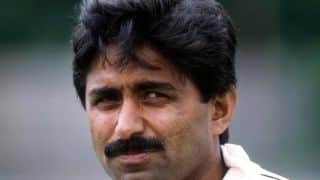