MI all-rounder Hardik Pandya on Tuesday said that his team's focus against RCB in their IPL match.

Bengaluru: Mumbai Indians (MI) all-rounder Hardik Pandya on Tuesday said that his team’s focus against Royal Challengers Bangalore (RCB) in their IPL match on Wednesday would be bowling with discipline and avoid conceding far too many runs on a high-scoring ground. “We know this is a high-scoring ground and as a bowler, we have to be ready for everything, but it would not be wise to concede 40 runs in four overs, which works against us,” Pandya told reporters on the eve of their match against Royal Challengers Bangalore. On the batting challenge posed by AB De Villiers and Virat Kohli, he said the bowlers go into every match with a positive frame of mind and bowl according to plan and wait for the rival batsmen to commit mistakes. Full Cricket Scorecard: Royal Challengers Bangalore vs Mumbai Indians, IPL 2016, Match 41 at Bangalore

“As a bowler, we need to be confident and positive about it. We cannot compromise with our discipline to bowl tight line and length, especially we are up against batting prowess of the likes of Kohli and AB de Villiers. Moreover, we wait for them to commit mistakes,” he said. Pandya said the pressure would be on both the sides as they know that their hopes for a play-offs berth could end if they lose on Wednesday.

“Obviously, RCB is a side which always look good and confident, but the pressure is on us and them also. This is a do-or-die match for us. And we know someone loses, it might end their quest for making into the next stage. Let us see who takes the pressure better, and comes out winning,” he said. Replying to a question, Pandya said that his team does not brood over the past but focuses on the next match. Royal Challengers Bangalore vs Mumbai Indians, IPL 2016, Match 41 at Bangalore, Preview

“To be honest, it is very simple. We don’t think much about the result because whatever happened is history. We are just looking forward to the Bangalore match, and, we would like to play as possible and, towards that end we are preparing for it,” he said. Asked what was the thinking for opting Visakhapatnam as home ground, Pandya said the team did not have any option but to opt for that city.

“To be honest, we did not have any option, but to go there. I don’t know if there were many grounds left in the country. So, we had to go Visakhapatnam,” he said. Asked whether his team has acclimatised to the conditions prevailing in Visakhapatnam, Pandya said, “As a professional, we had to get used to any given condition. We are used to it,” he said. 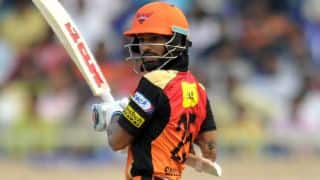