South African international Hardus Viljoen ended his Kolpak deal with England County Derbyshire, requested to have the final year of his contract terminated.

South African international Hardus Viljoen ended his Kolpak deal with England County Derbyshire, requested to have the final year of his contract terminated.

The 29-year-old, who debut for Derbyshire in 2017, claimed 62 first-class wickets at an average of 28. In total he played 53 matches across all forms for the Club, taking 99 wickets.

As per a statement in the club s official website, Fast bowler Hardus Viljoen has left Derbyshire by mutual consent. Viljoen, who made his Derbyshire debut in 2017, requested to have the final year of his contract terminated and leaves with immediate effect.

Head of Cricket, Dave Houghton, said: Hardus wishes to look at different options to further his career and the decision was made to release him from his contract with Derbyshire.

I would like to wish him all the best for the future.

Viljoen, who has 113 First-Class appearances to his name, played one Test for South Africa in 2016 against England at Johannesburg, returning with one wickey – that of Alastair Cook.

Later in the day Viljoen was picked in the Pakistan Super League s replacement draft as cover for New Zealand s Corey Anderson. Also in the draft, fellow South African David Wiese was picked up as cover for the partial available players AB de Villiers and Carlos Brathwaite. 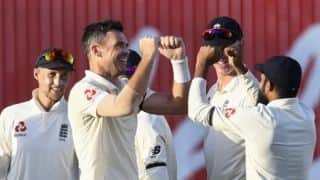 James Anderson equals record as West Indies bowled out for 289 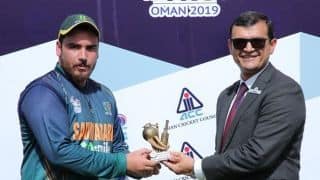