Harmanpreet Kaur has become India’s 1st Women’s cricketer to be signed by an overseas T20 franchise as she signed a deal with Sydney Thunders, which is also the reigning Big Bash League champions. Harmanpreet will now play in the second edition of the tournament which is scheduled to take place in December-January. BCCI President Anurag Thakur confirmed the signing on Friday, on the final day of BCCI’s working committee meeting in Dharamsala. The move has its own importance as only recently the BCCI has cleared the women players to participate in overseas leagues. According to reports, Harmanpreet, who is an all-rounder and also India’s vice-captain, received an offer from three teams. ALSO READ: Veda Krishnamurthy, Harmanpreet Kaur help India post 163 for 5 vs Bangladesh in Womens T20 World Cup 2016 at Bengaluru

She also received an offer from the Sydney Sixers, who came short of winning the Big Bash last time around. But Harmanpreet struck a deal with Thunders. Meanwhile, Alex Balckwell, the SydneyThunders captain had said earlier – “I think we saw in the Indian team some very dynamic players, including Veda Krishnamurthy and Harmanpreet Kaur, I think these two stood out. We have a pretty solid team… but we have an opportunity to bring another overseas players in and we’ll be looking to spend that spot wisely. Hopefully we’ll get one of the best players around the world,” as quoted by espncricinfo.com. ALSO READ: Mithali Raj, Harmanpreet Kaur, Jhulan Goswami’s way to WBBL despite BCCI’s reluctance

Blackwell had made the comment after India beat Australia 2-1 in the T20 series at the latter’s home. Harmanpreet had scored 46 off 31 balls in the first game then. She had continued her form in the T20 World Cup that followed soon after the series. She scored 89 runs and took seven wickets in four matches for India. 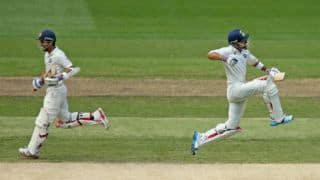