At least five players, who have played Tests since November 2015, have joined or are set to join English counties.

London: Cricket South Africa (CSA) Chief Executive Haroon Lorgat has admitted that the cricket board cannot do anything on the mass departure of players leaving South African shores, adding they are powerless to prevent players joining English counties on Kolpak deals. At least five players, who have played Tests since November 2015, have joined or are set to join English counties. Stiaan van Zyl for Sussex, Simon Harmer for Essex and Hardus Viljoen for Derbyshire are some of the Proteas players which have signed the Kolpak deals. In a Kolpak deal, players are allowed to compete in domestic cricket in South Africa in the English winter, but they must give up their international careers while under contract in England.

The arrangement provides players with greater job security, but also greater remuneration. As per the Guardian, off-spinner Dane Piedt, who played against England this year, and at least one squad member for the recent tour of Australia are seeking to move to English cricket. “We cannot restrain individuals from plying their trade, Horgat said. Over and above our regular reviews of the domestic playing rules and regulations to ensure it is fit for purpose, we will continue to rather focus on making sure that we have the best systems to produce the best cricketers in numbers.

We have realised a long time back that the world is a global village with people very mobile. Like in every other country and across every other profession, South African citizens will venture abroad to take advantage of stronger currencies and employment opportunities This mobility affects all professions and is not limited to cricketers who ply their trade in English counties, he added.

The move to exodus the South African shores is heightened at this time by the uncertainty over the perceived impact of Brexit. I have been told that players are choosing Kolpak deals now for fear of losing this opportunity once Brexit is implemented, said Lorgat.

However, an England and Wales Cricket Board (ECB) official has said that it is too early to know the impact of the referendum vote. Regarding the wider impact of Brexit, said the ECB spokesperson. It is too early to predict the outcome in this area. We await more information on the legal situation post-Brexit and will then need to hold further detailed discussions with our stakeholders, the government and other sporting bodies before we can comment further on the potential implications for cricket.

In April, sports minister Fikile Mbalula banned CSA, SA Rugby, Athletics South Africa (ASA) and Netball South Africa (NSA) from bidding for major events due to their lack of transformation. The South Africa national rugby union team, commonly known as the Springboks, have been given the target of ensuring that their squad is made up of 50 percent players of colour by the 2019 World Cup, while the Proteas committed to ensuring that 53 per cent of their side (six players) will be players of colour moving forward.

However, the CSA Chief Executive dismissed any notion that players going abroad due to transformation as ridiculous. “Any player citing transformation or targets is looking for a soft excuse as he or she might not be prepared to work hard enough to fight for a place in our representative teams,” said Lorgat.

“We only select the best as was evident in our recent successes against Australia. You don t whitewash Australia or beat them seven times in a row without choosing your best,” he added. 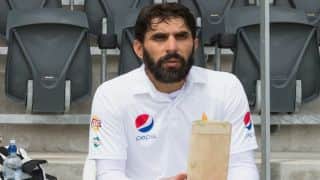