Hashim Amla made an unbeaten 118 to help South Africa foil a Pakistan attack and reach 245-8 at close on the opening day of the first Test in Abu Dhabi on Monday. 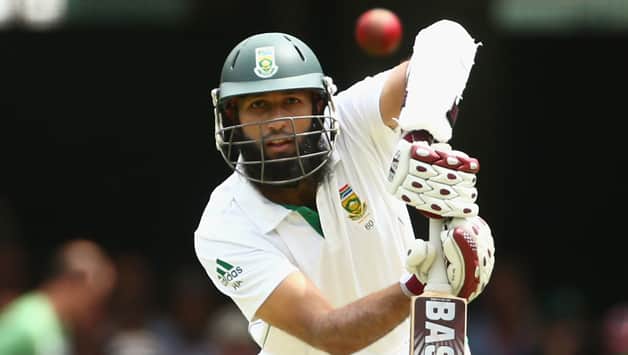 Hashim Amla made an unbeaten 118 to help South Africa foil a Pakistan attack and reach 245 for eight at close on the opening day of the first Test in Abu Dhabi on Monday.

This was the 30-year-old right-hander from Durban’s 20th Test hundred. Number ten Dale Steyn was unbeaten on 13.

The prolific Amla added 61 for the fourth wicket with AB de Villiers (19), and another valuable 95 for the fifth with Jean-Paul Duminy (57) to stop Pakistani bowlers from running away after they had wrecked the top-order.

Amla has so far hit 13 boundaries during his 250-ball knock at Sheikh Zayed Stadium. Currently the number one batsman in Test rankings, Amla reached a hundred with a single off spinner Zulfiqar Babar, taking 201 balls.

Duminy praised saviour Amla. “Just to see the power of concentration he (Amla) has is phenomenal,” said Duminy.

“I saw a stat today that he is 30 Tests behind Gary Kirsten and only one Test hundred [behind]. That says a lot because Gazza [Kirtsen] was phenomenal himself. The key now is for him to try and push on for us. We strive to take responsibility within the team when you’re in and hopefully he’ll do it for us.”
Duminy said South Africa’s total was satisfying.

“We would definitely have taken 245 for three or four. Stats show that you tend to lose wickets up front so unfortuntely we fell for that. All we can do tomorrow [Tuesday]  is come with a positive frame of mind and try and get as many runs as we can and start well with the ball.”

Just when it looked as though Amla and Duminy would see off the day, left-armer Babar (three for 89) struck twice, dismissing Duminy and Faf du Plessis in the space of six runs to bring Pakistan back in the game.

Duminy, who had not played a Test since rupturing his Achilles tendon on the tour of Australia in November last year, hit six fours and a six before sweeping Babar straight into the hands of a deep fine-leg fielder.

Du Plessis edged Babar to slips on one, thrilling the roughly 2,000 fans celebrating the Eid holiday.
Pakistan had looked to Saeed Ajmal for the breakthrough, but the off-spinner looked off colour on his 36th birthday, conceding 57 runs and managing only Vernon Philander’s wicket.

Pakistani pacemen Mohammad Irfan (two for 42) and Junaid Khan (one for 52) had generated lively pace, with Irfan taking two early wickets in the first session.

Irfan, the tallest ever player at seven feet one inch (2.1 metres), lifted one to Alviro Petersen (three), whose fended push was well caught by Shan Masood at short-leg, and then had Graeme Smith for 15 in his fourth over.

Smith, who is playing his first international match since an ankle injury earlier this year, hit Irfan for two well-timed boundaries but the lanky paceman had the last laugh, dismissing the South African skipper caught behind.

Kallis, who is also playing his first Test since February this year, looked rusty before he edged a sharp incoming delivery from Khan for wicket-keeper Adnan Akmal to take a smart low catch.
South Africa were struggling at 66 for three at lunch.

De Villiers helped Amla take South Africa past the 100-mark before he fell, run out for 19.

He defended a slower one from Babar and as the ball rolled to first slip, Younis Khan threw the ball to Akmal who saw the batsman out of his crease and dislodged the stumps.

Pakistan chose two pacemen and as many spinners, with 34-year old Babar and opener Shan Masood making their debuts.

South Africa entered the match with three frontline pacemen and Peterson as only spinner. The second and final Test will be played in Dubai from October 23.