On October 26, 2017, the ED had submitted to the court that it would not precipitate the matter till the next date of hearing.

The Madras High Court today dismissed a plea by former Board of Control for Cricket in India president N Srinivasan against the Enforcement Directorate’s proceedings against the Board for alleged violation of the FEMA Act during the Indian Premier League team-season 2 conducted in South Africa in 2009. Justice T Raja passed the dismissal order, paving way for the ED to continue with its proceedings.

The judge said the issue had already been dealt by a division bench of the Bombay High Court which had settled the issue and added that the petitioner cannot “agitate it again before this court.” The ED had initiated the proceedings under the Foreign Exchange Management Act (FEMA) against the BCCI in 2011 and issued notices to its erstwhile top officials, including Srinivasan and Prasanna Kumar, for transferring foreign exchange totalling USD 4,98,62,799 to South Africa without the permission of the Reserve Bank of India.

Assailing the proceedings, Srinivasan and Prasanna Kumar had moved the high court. On October 26, 2017, the ED had submitted to the court that it would not precipitate the matter till the next date of hearing. After that the case was not listed for hearing.

Utilising the opportunity, the petitioners misinterpreted the submission made by the ED on October 26, 2017 as interim order of the court and were refusing to cooperate with the proceedings, the ED alleged.

On May 31, concluding its inquiry, the ED slapped a penalty of over Rs 121 crore on the BCCI, Srinivasan, former IPL commissioner Lalit Modi and others for alleged FEMA violation during the 2009 IPL. 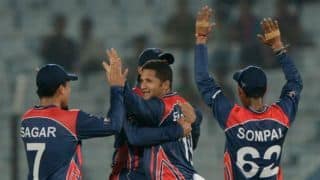 Nepal to make ODI debut against Netherlands in August